So far, we have looked at various abstract design aspects of natural gas pipelines: the components, the relationship between supply and demand, the need for seasonal underground storage, and above-ground storage for daily buffers. While these are all important issues influencing natural gas pipeline placement and construction, we still have not addressed the hard parts, like drawing lines on maps to indicate the exact placement of the pipelines.

Only 13 percent of the over 2.4 million miles of natural gas pipelines in the US are high pressure/high volume transmission lines. The remaining 87 percent of gas lines are the smaller distribution lines buried under the streets of our towns and cities. Consider that of the 160 million housing units in the US, only 70 million use piped natural gas (2011 US Census Housing Survey). Over time, more homes use natural gas for heating and cooking, driving up growth of the distribution network, influencing the growth of the transmission network.

Natural gas as an electrical generation fuel also drives the growth of the distribution and transmission networks. Major gas turbine power plants need both the pressure and volume that transmission lines provide. While still in its infancy, local micro-generation of electricity using micro-turbines requires high volume and pressure gas.

Trunkline pipes typically are greater than 20 inches in diameter, and most pipes are 30 inches or 36 inches in diameter. When they are first constructed, the pipelines typically use a larger diameter and pressure specification pipe than will initially be needed, in anticipation of future demand growth. When pipelines are first constructed, the pipeline companies design initial compressor capacity to meet current needs. As the load increases with growth, the pipeline operators can always add more compressors or compressor stations.

The location of the pipe dictates the size of the pipe and the thickness of the pipe walls. The population of the area, the geologic and ground conditions, the other utilities in the area, and the ground use in the surface above a pipeline all play a part in the engineer’s decisions about pipe diameter and thickness. Standard design codes require all pipelines passing through populated areas to reduce maximum operating pressures for safety reasons. Pipelines passing through soft, sandy soils may use thicker walls than pipelines in dense soils. When passing under roadways or rivers, the pipes must pass through trenches with reinforced concrete walls and ceilings.

Natural Gas Transmission Pipelines cross state boundary lines, so a US federal agency, The Federal Energy Regulatory Commission, or FERC, regulates the construction and operations of all of the Pipelines.

FERC’s span of influence is broadly defined under the Energy Policy Act of 2005 to include:

The process of applying for and obtaining the permits to build and then fill a natural gas pipeline can take as much time as it takes to build the pipeline itself. The certificate process includes consulting with stakeholders — like the people who live and work along the pipeline path, the companies that use the gas, and even people who want to stop the pipeline because they don’t like fossil fuels.

The FERC may make preliminary determination on a pipeline application based on non-environmental considerations on large projects, including the economic impact of the gas transmission pipelines on the local economy, overriding a negative EIS, or even overriding a positive EIS.

An Example – Spectra Energy and the NY/NJ Expansion Project 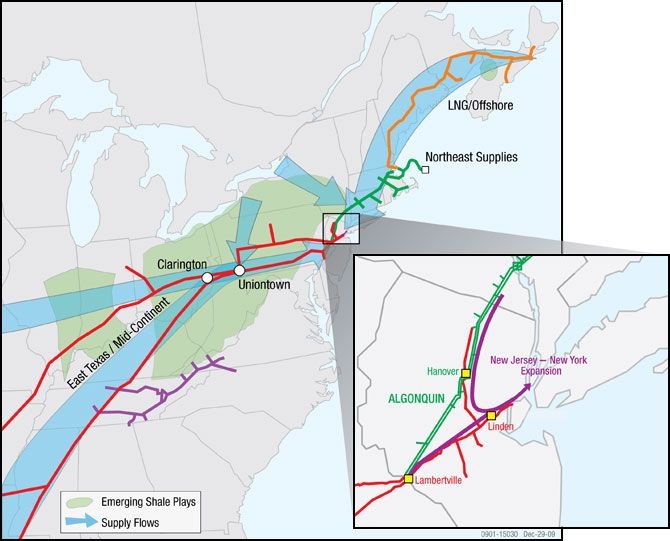 Even short pipelines that are extending the reach of existing networks can face formidable resistance. Spectra Energy just opened a new project that connects major interstate transmission lines in Linden, New Jersey with the West Side of Manhattan. The project moves 800 million cubic feet per day (MMcf/d) through 16 miles of new pipeline and five miles of replacement pipeline through Jersey City, under the Hudson to 10th Avenue and Gansevoort Street. The new pipeline connects Spectra’s existing Texas Eastern Transmission and Algonquin Gas Transmission pipeline systems to the ConEd distribution system in Manhattan.

Most of the resistance to Spectra’s New Jersey/New York Expansion Project came from an environmental group, Sane Energy Project. SEP fights the fossil fuel and nuclear industries, embracing renewable energy. Started in New York City initially to resist the Spectra NJ/NY Expansion, SEP expanded its attention to fight a proposed lateral pipeline feeding the eastern boroughs of New York City. While the organization may claim to be sane, the methods and rhetoric they use to fight these new pipelines tend to be hysterical, peddling fears of radon gas exposure and pipeline explosions. Emotions carry people away, and nothing gets people stirred up like the idea that a twelve-block section of a city could become a gas fireball.

As we have said before in our articles, one must ask the question, cui bono — who benefits? Better in this case to ask, cui prodest — who advances the argument?

The SEP site uses a fair amount of references to like-thinking sites, linking to stories inside SEP's own site and to other blogs and news stories that do not stand up to scrutiny or to intensive fact checking. The site loves to tell the story of the September 9, 2010 PG&E gas transmission line failure in San Bruno, CA. In this incident, a 30-inch high-pressure pipeline passing under a residential neighborhood failed at a field weld installed in 1956, causing a massive explosion that killed eight people, injured 58 others, and destroyed 38 houses. While we supply here a link to the Wikipedia page describing the event, we don’t recommend it as an authoritative source of information about the causes of the accident.

The best report about the accident is the National Transportation Safety Board investigation that cited as the primary cause a flawed seam weld that burst when the power to the SCADA systems failed in a repair process and the line pressure climbed above what the doomed weld could hold. Interestingly, we find that none of the organizations that use the San Bruno tragedy as a reason for stopping modern pipelines reference the NTSB report. The report is a fantastic failure analysis, highlighting the higher failure potential of older pipelines constructed in the 1950s and 1960s — like PG&E Line 132. If activist websites like SEP were to reference the NTSB report, the truth it tells would undermine their fearmongering arguments.

The Jersey City based No Gas Pipeline is another site built to resist the NY/NJ Expansion Project.  Bringing up the horrors of the San Bruno accident, the site does mention the NTSB report, but lists one of the secondary causes of the failure, the overpressure, omitting any mention of the faulty welds.  The site goes as far to make the claim that “any mechanical or electrical failure can lead to eventual explosion.”   The site goes on to make claims about the FERC, alleging that the FERC has a profit motive, that past FERC employees are now gas company directors, and that former gas company employees are now in positions of power in the FERC.

The NY/NJ Expansion became commercially available to carry gas on November 1, 2013, ready to move up to 800 million cubic feet per day (MMcf/d) of natural gas to Manhattan. Both SEP and No Gas Pipeline are attempting to petition the FERC to reverse its decision to allow operations, and threatening to sue the FERC in court.

To help sell the NY/NJ project, Spectra launched a website to counteract resistance by local anti-pipeline groups. On that site, they have posted many YouTube videos, and essays about the safety and economic benefits of the pipeline. The following videos are just part of Spectra's effort to sell the project to the public. If you compare the tone of the material, the Spectra effort is not as shrill or as bombastic as that of the opposition; Spectra appeals to reason and calm; its opponents appeal to fear. Look at the quality and depth of the information. While you may want to ascribe the difference to the vast resources of the big pipeline company versus the shoestring budgets of the scrappy underdogs, you should also consider who omitted facts inconvenient to their arguments.

Cui bono; who benefits from these efforts? In the hyper-partisan environment of accusation, who really does benefit? SEP wants to stop any natural gas or oil-based energy. NGP wants to just stop the pipeline out of fear. Spectra wants its pipeline to provide gas to the people of New York City.

The company won the regulatory battle, built the pipeline, and is now moving natural gas. The process works.

The following video by Spectra Energy is a flyover of the new 42-inch and 30-inch gas transmission pipelines from Linden, New Jersey to Manhattan that went into production in late 2013. Consider the cost of developing this cool sales tool to sell the route of the pipeline to the public.

Spectra Energy maintained its public relations efforts with a number of videos that highlighted how they proposed to construct the project. This is a great video about how Spectra used Horizontal Directional Drilling in the construction of the New Jersey/New York Expansion Project.

This video highlights the first of the HDD pull-backs of the Spectra Energy New Jersey/New York Expansion Project.