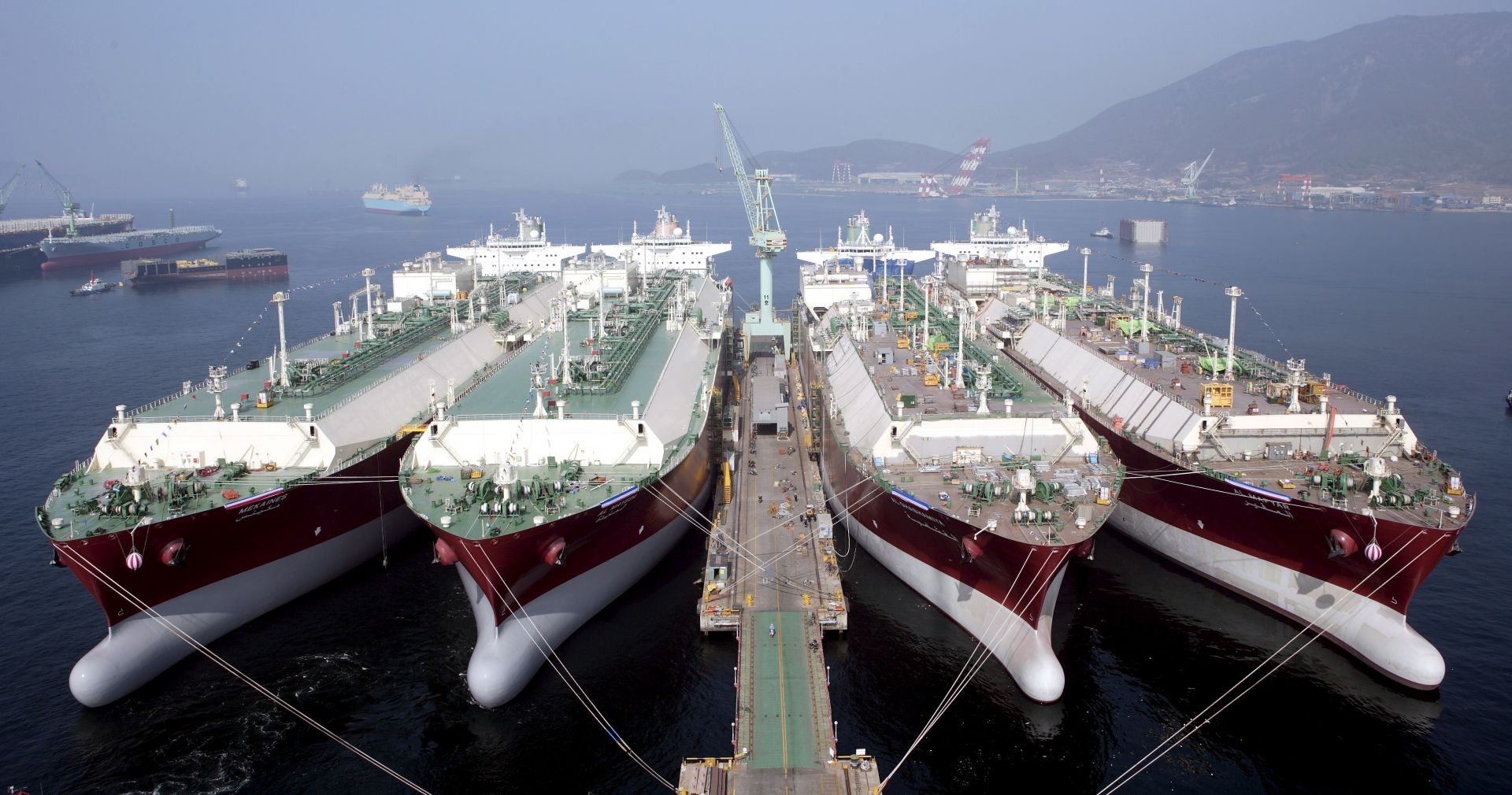 Imagine a huge Thermos bottle on a ship. That is the basic concept behind an LNG tanker ship. Of course, there are also pumps, pipes, valves and other controls that add to the complexity of the operations of the ship. And, the cold cargo adds to the complexity of loading and unloading operations. Still, these ships are, in the most basic form, floating Thermos bottles.

The first oceangoing LNG tanker, the Methane Pioneer, departed the Louisiana coast in January of 1959 with a load of LNG destined for the UK. The Methane Pioneer was a modified ship, originally a standard cargo vessel, modified with aluminum cargo tanks. Based on the success of that first voyage, the UK Gas Council and carrier Conch International Methane Limited ordered two purpose-built LNG ships, the Methane Princess and the Methane Progress. Most of the initial LNG trade focused on supplying fuel to the UK. In the late 1960s, with the development of the Alaska oil fields, trade lanes between Alaska and Japan opened up. In the 1970s, the US government encouraged shipyards to build LNG tankers to create additional markets for the natural gas developed in Alaska.

Island nations with limited energy production are the consumption markets for most of the LNG today. Japan is a huge market, as is the UK. France, Belgium, and the Netherlands are also large consumers of LNG. Historically, Qatar, Egypt, and Australia have provided the primary supply of natural gas converted to liquid. That was, until the development of the shale gas plays in the US.

Shown above, the typical LNG tanker consists of four to six liquid gas tanks, connected with a series of pumps and pipes. The tanks rest within the hold of the vessel, surrounded by ballast tanks and cofferdams.

Typically, there are three submerged pumps in each tank — two main cargo pumps, and a smaller pump called the spray pump. The spray pump sprays LNG on the top inside of the tank to keep it cool, and also pumps small quantities of LNG to be converted into fuel to propel the ship.

The loading and unloading process is complex. In its liquid form, the gas cannot support combustion. But once it becomes vapor and is mixed with oxygen, the gas becomes highly inflammable. So the cargo cannot be loaded directly into the tank, as that would create an explosive environment and the rapid temperature change could damage the tank.

The first step of the process is to fill the tank with inert gas, typically CO2 created by burning diesel in air to bring the oxygen level in the tank below 4%. Next, the ship takes on LNG and vaporizes it into a gas, pumping it into the tanks to displace the inert gas. As hydrocarbon content reaches 5%, the inner gas is directed to the shore-side terminal where the vapor is burned off with a flare tower to prevent an explosion.

Once filled with the warm gas, the spray pump sprays liquid LNG into the tanks, which vaporizes and starts to cool the tank. The system vents excess gas for flaring or liquefaction by the terminal. This process continues until the tanks reach –140°C. Now the tanks are ready for liquid LNG. As a liquid enters the tank, it displaces the methane gas used to chill the tank. The gas is reprocessed back into liquid by the shore-side terminal. The LNG flows into the tanks until they are filled to about 98% of their capacity, in order to allow for expansion of the cargo.

At unloading, the ships systems vaporize small quantities of liquid gas, pumping the chilled vapors through the pipes and connections to chill the metal and avoid thermal damage to the equipment. Once sufficiently cooled, the transfer switches to liquid flow from the ship to the unloading terminal.

Underway, the LNG cargo starts to convert from liquid to gas. Typically, between 0.1 – 0.25% of the cargo converts the gas each day, so on a 20 day voyage anywhere between 2 to 6% of the liquid boils way into gas. Unless the gas is vented, the pressure in the tanks will build and burst the tanks. Older LNG tankers use steam turbines for propulsion, using boilers that run on a combination of methane and oil. As the liquid in the tank begins to boil off, the vaporized gases routed to the boilers create steam. As vessel operators converted ships to slow-speed diesel engines, the vessels had to be equipped with reliquefaction plants to help control the gas loss. Some vessels now use long-stroke engines designed to burn natural gas, again using the cargo to fuel the vessel.

One example of the new technology is the Provalys, one of the world's largest tankers. Operated by GDF SUEZ (now Energie) since 2006, the Provalys can hold up to 154,000 m³ of liquefied natural gas (LNG). Using a new tank design that keeps natural evaporation to a minimum, the inevitable residue fuels the ship's propulsion system.

Natural events have a funny way of shifting market demand. The 2011 earthquake off the coast of Tōhoku, Japan shifted the global energy market in a huge way. The earthquake caused the level 7+ meltdown of the Fukushima Daiichi Nuclear power plant. After the quake, Japan shuttered all 50 of the operating reactors, and the restart process will take some years, if it happens at all. For a country that imports over 80% of its energy, this loss of power-generating ability creates a shift in generating fuels.

Nuclear power in Germany was already on shaky ground before the 2011 earthquake. The German government quickly announced that it would decommission its nuclear power plants. Eight reactors were shut down immediately after the earthquake, and the German population remains ambivalent about supporting the construction of any new nuclear plants. Until March 2011, Germany generated 25% of its electricity with nuclear plants, but the German government has since then announced that the remaining reactors would close by 2022. Germany has turned to importing electricity from its neighboring countries, primarily France. Germany has also increased coal-fired electrical generation, placing more carbon emission pressure on the atmosphere.

Japan doesn't have the same option to switch to coal, so the Japanese power companies must turn to liquid natural gas as their alternative fuel. To meet this increase in LNG shipments, Japanese shipping lines placed orders for around 90 new LNG tankers, taking delivery between 2015 and 2020. The increase in Japanese shipping line orders represents an increase of almost 40% in total capacity.

Global demand for LNG will more than double between now and 2020. More demand means more ships. That demand, and the ships, will drive the investment in LNG production facilities in the US. Operations designed for gasification of imported LNG now go through conversion into liquefaction operations.

The following is a long video (48 minutes) that is a full tour of a LNG carrier.

Not everyone is happy with the idea of LNG tankers transiting through their back yards.  Some folks want to scare you, as this next video attempts.  Long on scare but short on real truth.

"Anything is possible," the above video argues.  If you listened carefully, there are many conditional statements that at first sound plausible, but do not stand up to hard examination.  Notice that the video keeps referencing a report from the US Sandia Labs (mispronouced in the narration), using the report to make claims of what the damage could be.  It is interesting to hear the actual words from the author of the report, as presented in the video below.

Until 2016, the US only imported LNG.  Most of the import LNG landed in the port of Boston, at the Everett LNG terminal, located on the north shore of the Mystic River just north of central Boston.  Operating since 1971, the Everett terminal supplies a 1.6 MW gas fired power station and provides about 20% of the natural gas consumed in New England.  Purchased in 2000 by GDF Suez/Energie, the terminal accepted ship delivery 1,000 in 2016.