Case Study: the Contractor and the Sub 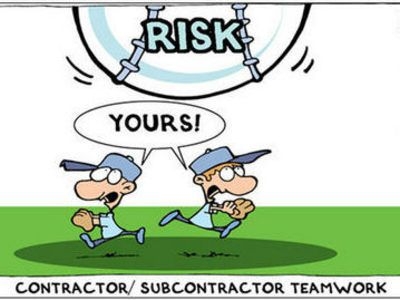 Picking up where we left off in The Owner & The Contractor, the contractor now faces a dilemma. The customer wants to switch the projects, and now demands that the contractor move a retrofit forward and a new construction project backward.

This project is located in California, a state known for earthquakes. Structural engineering to meet the seismic conditions of the state is complicated by the fact that the building codes for material handling equipment differ from the requirements for buildings. Seasoned material handling systems suppliers know to use specific terms to define and describe the systems to the local municipal authorities when applying for permits.

One example is the use of the term mezzanine to describe an equipment platform or a catwalk. In architecture, a mezzanine is an intermediate floor between the main floors of a building. Architectural mezzanines are often open on one side, overlooking the floor below. These mezzanines are part of the building's structural construction. The industrial mezzanine, however, is a freestanding structure, typically made of steel, installed separate from the building structure. An industrial mezzanine can always be removed from a building.

Most building officials do not know the difference between architectural and industrial mezzanines. California building codes do not draw a distinction between the architectural and industrial versions; the code just refers to mezzanines. The building codes do consider that a mezzanine can hold people, and as such the code requires mezzanines to be built to the same standards as the upper floors of a building, a standard that far exceeds the typical design requirements of industrial mezzanines. So, seasoned material handling equipment suppliers know to use the terms industrial platform or equipment platform to describe these systems, so that the code compliance officers know which of the building codes to apply for permit approval.

While the contractor had built conveyor systems in high seismic zones of California in the past, on this specific project the management team used the term mezzanine in the permit applications and on the drawings submissions. The building department officials, although they were aware of the difference, applied the more stringent code requirements to the equipment structures, requiring substantial redesign and augmentation to the size of the steel members, the foundation footings, and the bracing of the structure. By the time knowledgeable personnel (people outside the contractor's organization) understood the problem, it was too late to change the descriptions on the permit in order to prevent substantial cost and schedule escalation.

The contractor in this case follows a different drummer, hiring local contractors for millwright and installation duties. For most of its history in the US, the contractor provided services under the direction and contracting of the general contractor running the project, installing baggage handling systems in airports. These projects typically received federal funds, and therefore required the use of union labor. Millwrights, welders, and structural steel contractors typically are licensed construction contractors, accustomed to the typical construction contracting process.

Meanwhile, progress on the main system platforms went slowly. The platform suppliers, following the traditional practice of hiring traveling installation contractors, started the hard work of erecting the heavy steel. Because of the schedule changes, the platform supplier could not meet the new deadlines. Under pressure to meet the new schedule, the conveyor contractor orders three other platforms from another supplier who could fabricate and install to meet the schedule.

So, in this situation, the Owner contracts:

...the Prime/General Contractor, and they contract to buy a platform from...

...the Supplier, who makes the material, and they contract...

...Installer Company A, which provides project management, and they contract...

...Subcontractor B, who provides direct supervision and tools, and they contract...

In this case, the contract between the Prime and the A level sub-contractor rivals the depth in paper of the contract between the Owner and the Prime. A 22-page, two-column, nine-point type, fine-print Installer Services Agreement (ISA) and a 35-page, 12-point Project Services Agreement (PSA) is what the Prime issues to the sub-contractor. Add in over 120 pages of drawings, 20 pages of example forms, and 12 pages of schedule, all referenced on a single page in the appendix of the PSA, and you find a large, complex, and incomplete contract package.

Get below the A level of the sub-contractors and the contracts become much simpler. Agreements become only a few pages, hashing out a few key points like payment terms, reporting, and insurance requirements. In some projects this kind of contracting looks more like purchase orders, because in some cases that is exactly the contract used between the subs of subs.

If complexity can breed mischief due to misunderstanding of the language used in the agreement, then the vagueness of purchase-order contracts can also breed mischief, mainly due to omissions of issues that people want to ignore.