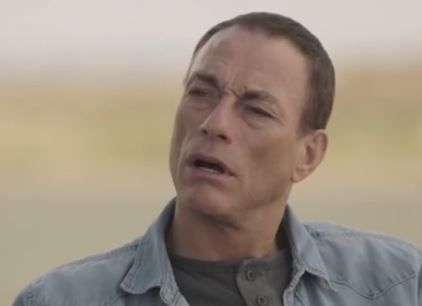 Before the whole world got on the viral bandwagon, I watched Jean-Claude Van Damme perform his Epic Split, standing on the rear view mirrors of two Volvo European issue FH series trucks. By now, just about every blogger and columnist has weighed in on the story – mostly just to gush about how cool the video of the one-take stunt is.

You probably saw the actual video – but I don’t think you saw this one, the teaser where they are discussing the stunt beforehand. I think the best line is when Jean-Claude says “We’re going to drive forward…of course.” 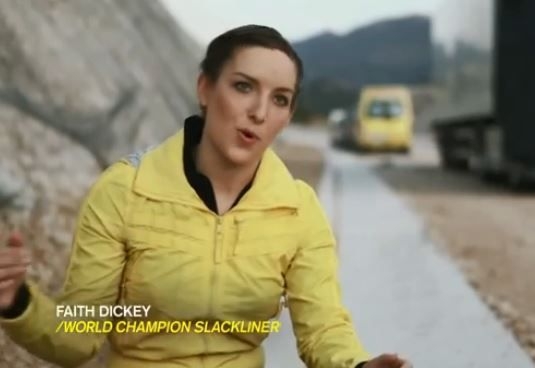 Yeah, it is cool. The "muscles from Brussels" pulled off a tough stunt. Yet, in my humble opinion, it is not as cool as Faith Dickie’s slack line stunt, walking a slack line between two Volvo trucks, moving at 30+ MPH on a closed highway in Croatia. Faith has to cross between the trucks – on about 25 meters of line, over bridges and the center median, before the trucks enter a pair of tunnels. If she does not make it across the line before the tunnels, well, splat is the word that comes to mind.

I think that Faith really has bigger balls than JCVD. Yeah, he did his split, but she walked the line. One shot inside the cabs shows the speedometer at 75 KPH – 46 MPH, so she had a much larger set of problems to overcome. I think the visual beauty of The Epic Split, with the music, works to build a drama that is more memorable, backing into the sunset.

Volvo’s effort to use stunts this year to demonstrate the new technology of their trucks is an interesting take. The idea behind the technology is to make the process of driving easier for both an aging population, and to appeal to females. If the truck drives with no more effort than a car, how much happier is the driver about driving? If you can drive with less effort, will you be more alert? Will the new technology actually reduce accidents? These are interesting arguments to make as a differentiator in the market.

The most skill in The Epic Split is not needed for what Jean-Claude is doing. He just has to balance. The truely skilled are the drivers in the cabs of those two trucks. If you watch the video carefully, there are four people in the cabs, two per truck. Notice that the truck on the left, the one that maneuvers away, executing the split, is a straight frame rig, while the rig on the right is a tractor-trailer combination. While it is not hard to back up a straight frame in a straight line, a combination is super hard to do. Moreover, to make a combination split off, the tractor would have to counter steer into the path of the other truck, and then away, making Jean-Claude's stunt almost impossible. The real performers in this stunt are the guys behind the wheel of the trucks. Not to take away from the wonder of the machines, or from Jean-Claude, the stunt would not have worked without those drivers.

That Volvo is doing this advertising effort on YouTube is a wonder. They invested the same money in production as if these were to appear on broadcast television. Look at the Volvo Truck YouTube channel, with more than 300 videos, including incredible customization projects from Europe and the US. The drivers showcased own their trucks, and the videos demonstrate the lengths these drivers have gone to make their trucks extensions of themselves.

Most folks have a poor understanding of what life in a truck is like. Even on opposites of the Atlantic, drivers don’t understand all of the issues that their counterparts on the other side of the pond have to face. The Volvo videos of the European drivers, like Dutch driver Dagmar Klink and her Pink Lady, or UK Scrap Hauler Wayne Connelly’s Terminator (“white interior, bad idea”) illustrate that the extra space in the cab is for resting, but not really living. They may overnight in the cab, but they don’t live in it.

On the opposite side of the spectrum are West Virginia’s Elizabeth and Ricky Hollins, a married team who created a rolling condo for their Volvo rig. The space and weight on the truck may limit the places they can go and the freight they can haul, but judging from the money invested in the cab, you have to imagine that they are not hauling the cheapest of freight. There are specialized drivers, like explosives and military hardware drivers, who can’t stop the truck while under load – or have to stop at military bases.

When you drive your office, is it crazy to make it your own, an expression of who you are, or make it feel like home? Not when you own your office. Clearly – these drivers own their trucks. They own their offices. Perhaps one of the hardest things for a company driver to do is work out of the company truck, utilitarian and bland - with no personality. Some could argue that drivers that add personal flourishes to their trucks are not professional. I don't agree. You look at the pride these drivers place in their trucks, knowing that they are easy to identify. I doubt that you will see any of these drivers breaking the law.

I am in the market for a new car – and the videos have me thinking…..