World War II brought many new innovations to manufacturing and logistics. Prior to the war, warehouses rarely ever got above 20 feet in clear height, limited as they were by the lifting ability of the hoists and two stage masts of the early industrial fork-lift trucks. By the 1970s, the typical warehouse used LP-powered counterbalanced lift trucks with three stage masts limited to 20-foot lifting heights. Few warehouses used narrow-aisle lift trucks, and those only lifted to 20 feet.

In the 1980s, improved construction and design techniques lifted the height of warehouse roofs. Building clear heights climbed from 20 feet to 24 feet to 30 feet above the finished floor. Lift truck technology improved, with both Crown and Raymond introducing the second generation of narrow-aisle reach trucks with stronger batteries, motors, and the tall two-stage and three-stage rigid masts. Rack manufacturers changed production lines to accommodate longer upright frames, and improved designs to increase the static and dynamic loads of taller stacks.

As warehouses grew taller, they grew to cover larger areas, too. In 1980 a one million square-foot warehouse with 30 feet of clear height was somewhat rare. Drive along the major interstates in any large US city today, however, and you see many one million square foot warehouses. As the facilities grew, the shapes of the buildings changed to accommodate life-safety code exit path distance requirements. As warehouses grew to cover more area, they became more rectangular, as they were limited to 600 feet in width without some form of protected emergency exit path.

As the buildings grew higher, the speed of which a fire could spread grew too. Taller stacks of material in racks helps fires spread upward with the flow of heated gasses that occurs in a fire. Consider what happens to the heat and the combustible gases from a fire in a pallet on the floor level of a seven-layer rack system. The heat rises, igniting the pallets above the fire. There is ample airflow above and around the pallets, which allows the hot gases to rise. These same spaces help the water from the sprinkler systems get to the fire source, but only by design.

This sets up an interesting conflict between the two parties interested in fire prevention and control — the protection of people and the protection of property. The fire department worries about making sure people get out of the building unharmed first, and its concern for property loss is secondary. The insurance companies, on the other hand, worry about the property loss first, trusting that alarms and exits will get people out of the buildings.

As storage heights climbed above the 12-foot level, high-piled storage became a concern for the insurance companies. Fire officials started to become interested after some spectacular large warehouse fires. And those large fires brought more pressure from the insurance companies to improve the sprinkler systems deployed in warehouses. 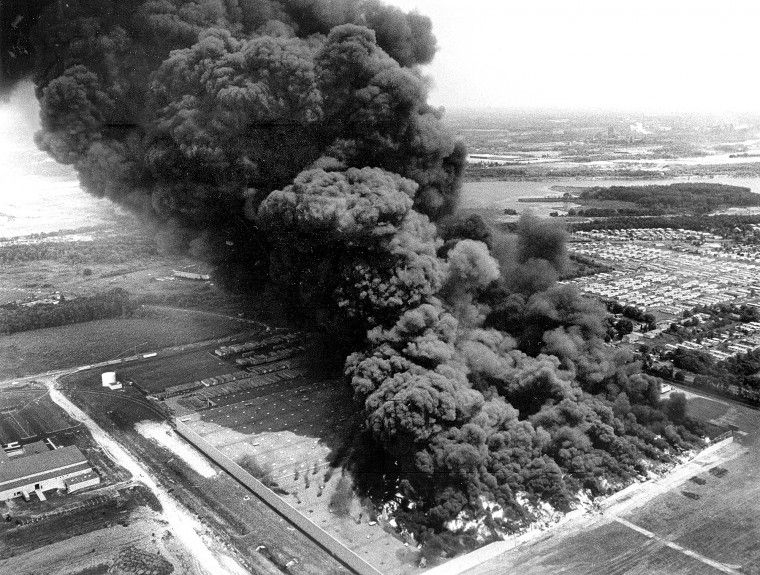 Fire sprinklers are for the most part hidden from sight in a warehouse. Sure, the standpipes, roof lines, and sprinklers are visible as you walk around a warehouse, but after a short time they fade into the background. Look into the flue of the pallet storage racks and you may find sprinkler lines. Or you may not.

As racking systems grew past the 12-foot level, fire codes for combustible products started to require sprinklers in the racks and in the rafters of a warehouse. But not all building codes required sprinklers in the racks, and sometimes warehouses did not have roof-mounted systems. Before 1980, a large warehouse fire was not something of great concern to fire or building officials. But that was before the K-Mart warehouse fire in 1982.

In June of 1982, an aerosol can of carburetor cleaner fell out of a broken case in the upper level of a 15-foot-high pallet rack in the K-Mart distribution center in Falls Township, Pennsylvania. When the can hit the concrete floor, it split open and sprayed its inflammable contents into the air. Fire investigators suspect that sparks form the fork lift motor ignited the vapors, starting a fire. It did not take long for the fire to spread to the cardboard cartons in the storage racks, and for the aerosol cans to build pressure and split open, adding more fuel to the fire.

Firewalls split the 1.2 million square foot facility into four equal sections. Fire doors, normally open to allow for the free movement between the areas in the warehouse, would automatically close when the heat of a fire built up enough to melt the fusible links. A roof-mounted sprinkler system provided .4 gallons per minute per square foot over a 3,000 square foot area. A large diesel-driven pump fed water from a 10,000 gallon tank and the city water supply.

Still, the warehouse burned to the ground in about 90 minutes.

All these systems failed because of the way inflammable aerosol products react when they catch fire. When heated up, the valves fail first, venting the aerosol in the can, turning the can into a rocket. In the first few minutes of the fire, before the heat made it to the roof to set off the sprinklers, superheated cans shot off like missiles to other parts of the warehouse, rocketing through the open fire doors to set more fires where they landed.

Within minutes the fires had spread so quickly that the sprinkler system was unable even to control the fire, let alone put it out. The heat did not set off the fusible links until enough cans shot through the openings to set fires in the other sections of the doomed warehouse. As the fire spread and the heat built up, the structural steel in the building softened and then failed, bringing down the roof and the firewalls. In less than two hours, the fire burned from one end of the building to the other, consuming the merchandise, the equipment, and the building. The fire department declared the fire under control after nine hours, but it would take eight days to fully extinguish it.

The K-Mart DC held over a million cans of inflammable aerosols mixed in with general merchandise. With no sprinkler coverage in the racks to react faster than the roof system, the fire quickly spread out of control. With no containment of the aerosols, the cans rocketed off as they cooked, setting fire to the rest of the building. This was a fire waiting to happen. In fact, just one week before the fire, the local fire chief predicted that in the event of a fire, the building would burn to the ground in two hours.

His estimate was off by 30 minutes.

High-Piled Codes and In Rack Sprinklers

The $113 million loss (in 1982 dollars) served as a wakeup call for high-pile storage regulation. Shortly after the fire the NFPA released Title 30 of the NFPA code to address the storage and protection of inflammable liquids and aerosols. Concern over high-piled combustible goods grew, and local fire departments started began to take an interest in the contents of the warehouses within their jurisdiction, and in how the sprinkler systems in those buildings operated.