Over a decade ago I worked a project to close out a distribution facility the company had operated for over 30 years. During that time, countless general managers, directors, and vice presidents had made that DC their home. As with any DC, the layout of the building changed multiple times due to expansions, extensions, and additions. Major changes, like the building expansion, involved a full permitting process because the addition added over 150,000 square feet to the building. Other changes, however, like little in-plant offices, appeared with no permits. Those little additions without permits soon became headaches, and obstacles to my mission.

The merchandise was long gone. We sold the racks and sold the shelving, with the buyers taking the equipment down and removing it. In the final weeks before the building was to be transferred to its new owners, we discovered equipment that the used rack company did not want or forgot to remove. It all had to go before we handed the building over to the new owners, so I brought in an installation team to help dismantle and scrap what equipment remained.

Just before lunch on the second day, I got a call from the crew chief. The building inspector had arrived on site about an hour before and stopped all work. I knew we did not need a permit to remove the racks and shelving, so it did not make sense for the building inspector to stop the cleanup work. The crew chief said that the inspector wanted to talk to me, in person, before she would allow any more work.

Wonderful. A command performance. I had no choice other than to drive over.

The inspector was still there when I arrived, going through the offices and restrooms. After I introduced myself and asked what the problem was, the inspector simply said “follow me,” and walked into the warehouse. I followed and we walked around the corner to an in-plant office built of studs and plywood.

Pointing to the office, the inspector said “that structure was never permitted. You must remove it before the building transfers. Before you remove it, you must submit a permit for it.”

I stood there thinking about absurdity of her instructions; pay the permit for the office, and then remove it? If she wanted it gone, no problem, one call to a contractor and it was gone. But get a permit before removal? “That sounds kind of crazy,” I said out loud.

The inspector was not happy with my comment. Before she could go into a fit, I said “I must not have heard you right. I think you want me to get a permit to remove the office, right? You want me to get a demolition permit, correct?”

She looked at me for a moment, and then said “Well, we could do it that way too. There was never a permit for the office, and I want you to get a permit for building the office in the first place.”

I looked at her for a good fifteen seconds as I thought about what she said. “That office predates my employment with the company, so I have no idea of the history behind it. I also have no idea of any of the costs, plans or anything else about that office, so completing a permit for construction is going to take some effort.” I paused for a moment and then continued, “But I know that you want it gone, and the fastest way to make that happen is to submit a demolition application and get a crew in here to remove it. Will that be acceptable?”

With that, we started to have a deeper conversation about the office, and what she wanted us to do with some other areas of the building. In that conversation I learned that several managers ago, she had had a run-in with the general manager, who thumbed his nose at her and her inspections. The general manager played some politics, talking to the township leaders about the hassle she'd subjected him to. The leaders told her to back off, so she did. Time passed, that general manager went away, and our company decided to pull out. With our political lubrication gone, now the inspector was in for her pound of flesh.

By the end of the conversation, she realized that I was going to make sure we complied with her demands. Within the hour I went to the township offices and pulled the demolition permit, and three days later all evidence of the office disappeared.

I have been involved in the construction of distribution centers since the mid- 1980s. I remember projects on which inspectors expected a tip for expediting the paperwork; in other words, a bribe. I took over a project on which the previous project manager had given out tips, and quickly learned that once an inspector gets a tip, they always expect a tip. A call to the county attorney fixed that issue, and we got a new inspector who was all about making sure that we paid the city, not him.

Doing the right thing is the right way to go with any city inspector. Their job is to ensure that what you are building meets the life safety codes of the community. Inspectors who take bribes will only cause problems in the future, and companies that pay bribes deserve the liability exposure that comes with substandard work. The building codes exist to ensure the safety of the people using the buildings and equipment.

Building codes are firm, but not rigid, if you work with the building inspectors. A case in point is exit path distances. On one project I worked we approached the building inspector to get his read on our exit paths before we started construction of the building. After looking at our design and talking about how the facility would operate, he suggested moving four emergency exit doors and placing some additional exit signs. With that conversation we had no more issues, and no surprises when it came time to get our certificate of occupancy.

When you approach the building and fire inspectors at the start of the projects, work with them, listen to their concerns, answer their questions, and cooperate. They will return the favor...

...which is how it is supposed to work.

The engineering review becomes more important as we encounter more seismic events, like in the video above. I suspect that the system in the video was not properly permitted, because of the commodity stored (liquids) and the beam connectors used (you can see the connectors at the end of the video). This system was not designed to carry liquids in large containers during a seismic event. When the quake starts, you can see personnel running to escape the building. This system appears to support five or six levels of liquid in bulk containers, perhaps as much as 30,000 pounds of very live load. A properly engineered system would not have collapsed.

Recently I had to walk a client though the process. The executive did not understand the permit process, and questioned the time and cost. Once we explained the process, he understood the reasons, although he was not happy with the delay in the project.

If you're a warehouse manager contemplating a change to your storage systems, plan on pulling the proper permits for the work. If you are working with a competent rack dealer, or a competent material handling engineer (like our firm), your supplier or engineer can take care of the process for you. Still, it is the owner’s responsibility to ensure the proper application for permits and inspections.

The following is an outline of the permit process for most building departments specific to storage racks. This may vary, depending on the city, but it still covers most applications.

When all the construction is complete on the racks, the dealer calls the City for inspection. The inspector inspects, makes sure the installation is to submitted plans, approves the work, and signs and issues the final permit. If the inspector finds issues with the rack, the installer must remedy the problem before the inspector will approve use. 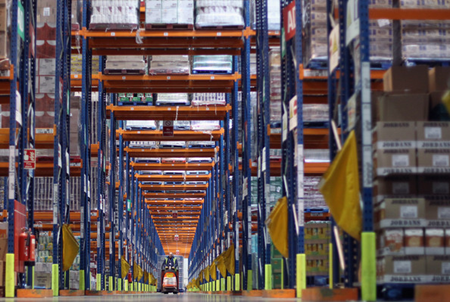