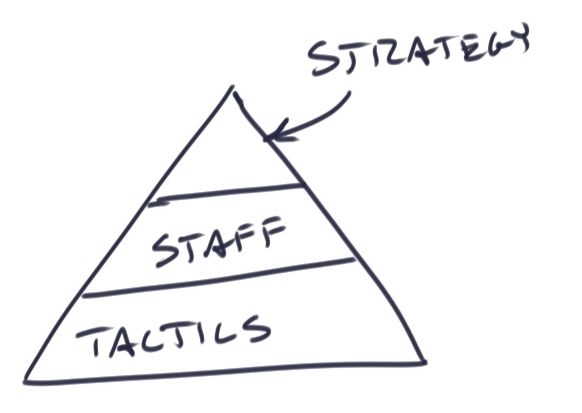 Back in the late 1990s at a supply chain conference, I watched a presentation about strategy and tactics.  You know these conferences, where the 2,500 – 4,000 attendees break out into 20 – 30 concurrent educational sessions presented by a peer, educator, a consultant, or someone from a service provider.

The presenter, a professor at a well known, Ivy League university.  (I will leave both the name of the professor and the school blank for the soon-to-be revealed good reason.)  He was surely smart, well educated, and proficient at presenting to a group of people, as you would expect from a professor from such a prestegious university.

Using standard PowerPoint slides with the requested number of bullet points and words per line, the good professor presented a view of strategy and tactics using a pyramid like shown here (his was much slicker).  Divided into three layers, with strategy at the top and tactics at the bottom, he went on to explain the role of  middle managers, what I show as staff in my sketch above (from my notes in the session).  As presented, the bureaucratic layer of management translated the strategy developed by the executive officers of a company into instructions the tactical layer executed.

I was simultaneously fascinated and horrified by the description of how strategy and tactics worked in this educator’s model.  My fascination came from over 20 years of observations experience, as I observed this exact behavior in many organizations over my career.  My horror came from the realization that this good professor thought this was the proper depiction of a best practice.  My own experience taught me that there was more to game than just these two pieces.  I knew from that same experience that senior leadership often did not create strategy; senior leadership often just approved strategy developed by that bureaucratic layer.  I could see missing pieces in the puzzle.  There was nothing about doctrine (sometimes called vision) and nothing said about execution -    nowhere.

I knew it was wrong.  However, I did not have a compelling argument against the model - yet.  I could argue against parts of what the professor presented, but not a complete system of looking at how an organization guides and leads itself.

A complete system.  That is what engineers like to see - complete systems; a practical application of the theory into something that works.  The good professor defined what he thought was a system.  In his view it was complete; to me it was far from complete.  It was a demonstration of top down, one-way thinking, and control.  There was no feedback in the pyramid.  Worse, where was the value of the bureaucratic staff?  This looked like what you find in a university, or a government operation, not the operations of a knowledge-creating company.

You would not find an organization like this creating operating cash flow.

A different way of thinking about innovation landed on my horizon that same year when I watched a gifted thinker present ideas about innovation.  His model was a circle - a loop.  In so many cases, when a company tries out a new idea, it fails.  Failure is typical when experimenting with new ideas.  Upon failure, so many companies are quick to declare the plan faulty, and go to work changing the plan.  They try again, see failure again, and blame the plan. 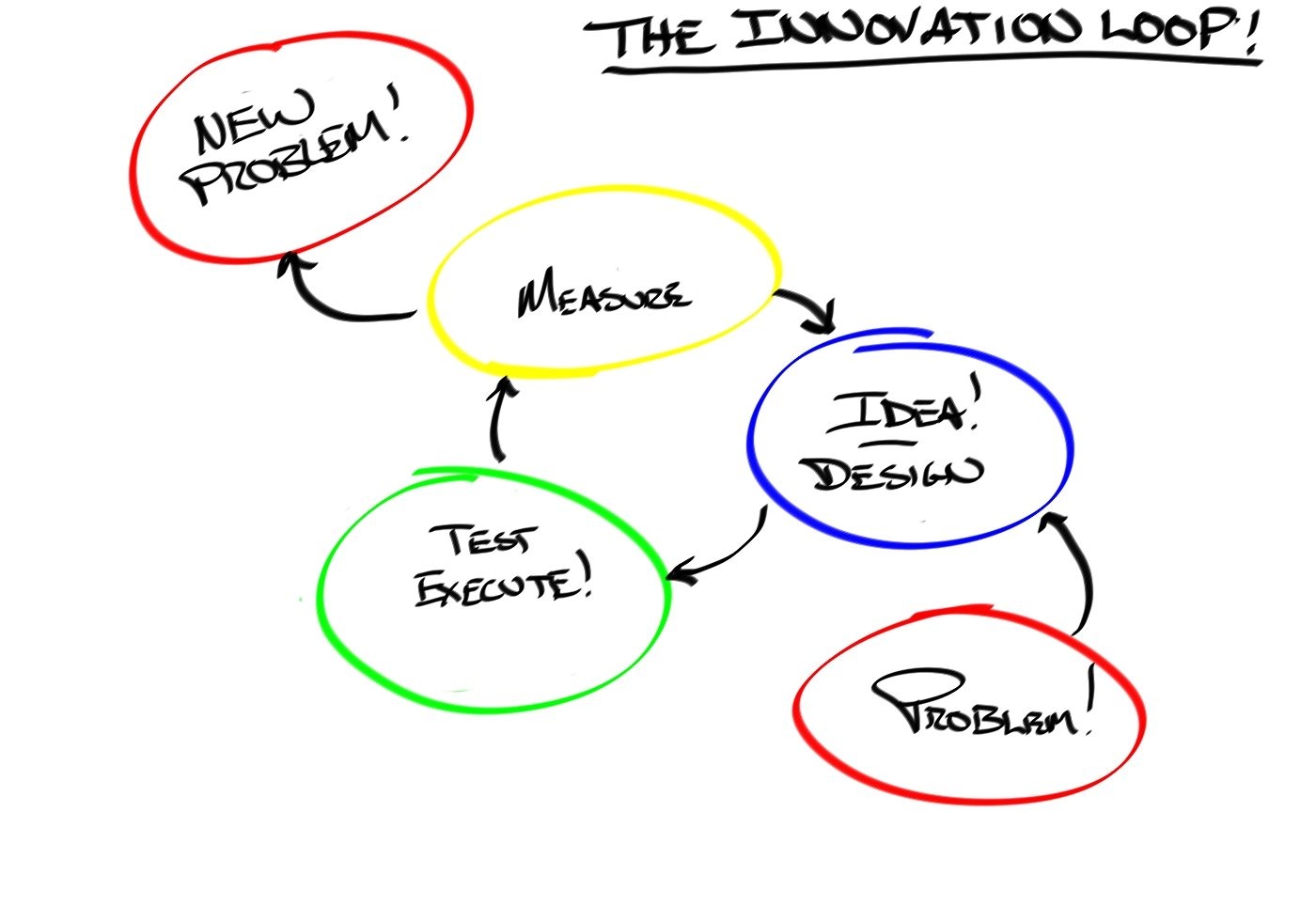 Innovation is nothing more than developing a new solution to a problem.  It could be an old problem, or a new problem.  The idea begets a design, which is tested and measured.  If it does not work then the innovator jiggles the design and tries again.  They stay in this loop until they solve the problem.  This virtuous loop is a process that gets repeated again and again, day after day.  It is a cycle, which upon victory, moves onto yet another challenge to solve.

In the days after drawing out the innovation loop, I started to think about how the same logic applies to how organizations determine their purpose, their direction, and accomplish their goals.  I knew the monolithic approach of the professor’s pyramid did not have a loop function, the direction and the thinking a single direction, lineal approach.

Systems loop.  There is feedback and self-correcting functionality in complex systems that operate reliably.  I started to think of how to use a loop to define the concept of organized thinking, goal setting, and planning.

My search led me to research the work of several different scholars and philosophers.  René Descartes developed his Four Steps for Solving Problems.  I spent time understanding the brilliant work of Ikujiro Nonaka and his work on how organizations created knowledge. Digging further, I kept seeing evidence of more and more cycles, virtuous loops of thinking and progress.  Nature’s evolutionary process is a never-ending loop of loops, where change creates a new problem for the organism to adapt to.

Could the process of planning how a company organizes itself be a virtuous loop?  Looking at the market, there are companies on continuous planning journeys.  Delhaize's US division, Hannaford Brothers, is one company that uses a rolling five-year plan to direct and develop its forward momentum.  Other companies use a static five-year plan for developing direction.

Could a loop work in defining a structure of direction?  As I doodled away on a pad of paper, the loop below appeared.

Could this be the virtuous loop of direction?