The Five S’s: Are We on the Same Page?
And, Why is That Bug on Your Desk?

This concept was popularized by the manufacture of cars in Japan at Toyota. Should be simple enough, right? Sort, Straighten, Sweep, Standardize, and Sustain are the Five S’s, and they are to be followed in that order. The concept and practice are popular among forward-thinking companies in the U.S. But some companies are just coming into the 21st century. To these companies, it is a foreign concept, and management can’t figure out how making cars relates to a small production or even a distribution environment.

I heard such naysaying recently. It was from an old-timer who had been at the same textile manufacturing company for 25 years. “I don’t see how this 5-S stuff for a car relates to a batch of backpacks being made.” Oooh, that made my innards squirm. I had heard this same resounding "no" in so many companies where I’d tried new concepts. I would suggest changes only to be met with the retort, “But, we’ve always done it this way.” I screamed on the inside, but smiled on the outside. And I thought, "Wait 'til they get a load of me."

And so, trying to figure out how to convey the Five S’s to an old regime, I looked across my desk to a few that were nearby. Good Lord! This place needed to 5-S their workspace before even mentioning the practice on the floor to production workers. I saw desks completely covered in paper. And material samples. And drawings. And old soda bottles. And a dead cockroach. It looked like we needed to 5-S some desks.

With my plan in place, I took my passion for change and improvement to my boss. Luckily, he was an orderly guy who kept a clean desk. I knew I could get him on the wagon. “Hey boss, what say we start talking about those Five S’s we’ve been kicking around, but just to the office area for a few weeks for them to buy in and get the hang of it?" He gave me his blessing and sent me on my way.

“I think it’s a great idea,” he said, as I laid out the plan. My ingenious plan, though very simple, was both funny and informative. I created a flyer with colorful words and eye-catching 1950s-era graphics. It read: 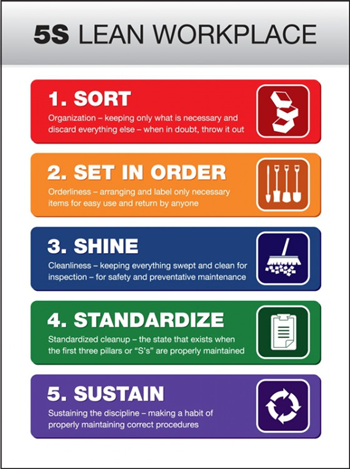 “Hey! Are you tired of flat soda freeloading on your desk for weeks?

Have the dead bugs made your First Article drawings their own private cemetery?

Beat the rap of a nasty workspace.

You’ll be looking good, feeling great, and impressing your friends in no time (insert picture of a man winking and making a thumbs-up gesture).”

Cheesy? Definitely! Fun? You better believe it! The response was partly mad giggles, part deer-in-headlights, and part who-the-hell-are-you-and-why-must-you-change-things? You get that type in every crowd.

So, the moral of the story, folks, is that, yes, you can bring new concepts even to an old, set-in-their-ways workplace. Add a little humor to the lesson and people start to catch on. Good times, people. Good times.

You Know a Lot More About Logistics Than You Realize