“Here is the replenishment pitcher,” I said, as I refilled the empty glasses with beer from the cold, frosty pitcher. 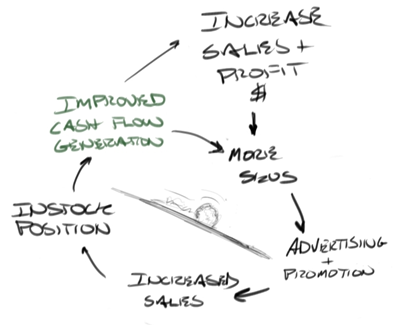 After a deep drink from his mug, Paul started in. “Patty, How many new SKUs are in the Tool program now?”

“We picked up about 400 SKUs in the distribution center, and the direct program added about 700 SKUs.”

That got my attention — 1,100 SKUs was huge. But it was also surprising that more of the SKUs shipped direct from the vendor. I’d thought that more shipped from the DC.

Patty went on. “The Black and Decker line doubled. We are now carrying the DeWalt Yellow line in addition to the SKUs that we bought from B&D before. They always have been a direct program, and adding the DeWalt line made it easier to make order minimums.”

“Did that drop the shelf stock points?” asked Rick.

“Sure did,” answered Patty. “The quantities in the regular B&D line dropped, and we dropped SKUs from the assortment, replacing them with the DeWalt equivalent.”

“With a better margin on the replacements, I bet,” commented Paul.

Patty just smiled as she continued. “The new Makita and Skil tools and accessories are still in the DC, but now we have the volume to order more frequently and meet the order minimums.”

“You see, Dave,” Paul said, “there is a limit to how much money the company can afford to invest in inventory. With the Tool line the company did increase the working capital commitment to boost sales. But there was a limit to how much money they were willing to commit, and with the expectation that the gross margin percent and the gross margin dollars would increase.”

“Increasing the assortment adds uncertainty to sales predictions,” Paul continued. “We expect sales to increase, but we are not sure what SKUs will sell, and what SKUs will not, and 1,100 SKUs is about 40 percent more than what we had in the old program. Some of new SKUS are going to add volume, because they don’t replace any other products. But others are going to cannibalize the existing SKUs. The new SKUs add inventory, putting pressure on the limits of the working capital commitment.”

“To make the program work, the category manager has to consider carefully what to add to the assortment, and how much inventory to carry on each item. When adding so many new SKUs, the manager has to opt for shallow stock levels on the items that he thinks will not sell well, or items that most customers will not worry about.”

“It becomes a hard balancing act,” said Patty. “If you guess wrong on what SKUs to shallow stock, you run out of stock. Run out of stock on a few SKUS while you have lots of inventory in the rest of the vendor line, and you may not be able to reorder for some time until you have enough to make the vendor’s minimum order.”

“I remember the Tool Department manager talking about low minimums for the new vendors,” I said. “He said that it makes it easier to stay in stock.”

“That was a big deal in the new program,” said Patty. “Our category managers in KC worked out special deals with the vendors to drop the order minimums for us, so the stores could order more often and keep in stock. From what I was told, we gave up a little margin percent to get the minimums dropped.”

“With the hope that the new sales on the net products would generate enough margin dollars growth to offset the margin percent decrease,” added Paul. “More margin dollars means more cash flow to the company, so giving up on the percent a little made sure that we generated the margin dollars, which is the name of the game.”

“Still, some vendors are inflexible with the order minimums,” said Patty.

“You are being too kind, Patty,” replied Rick. “Many of the vendors are stubborn pricks when it comes to order minimums."

“We are just as stubborn,” Patty admonished him. “There are buyers at corporate who will not even think twice about trading off a few points of margin to get lower minimums or to help with obsolete inventory. The new Tool Department Merchandise director is not worried about his GM percentage bonus like so many other buyers. He is looking at the total margin dollars and is betting that the department GM percentage is going to be better because of the new SKUs, regardless of how much margin he gives up on a single vendor.”

“The new Tools Merchandise manager can afford to ignore the GM percentage since his bonus is not tied to GM percentage,” said Paul. “I heard that his bonus is based on something called cash flow contribution.”

Both Patty and Rick looked at Paul with their heads cocked to one side, like dogs that had just heard a new sound they’d never heard before.

Paul smiled. “I’m not quite sure myself. One of the Tool category managers explained it to me last week. It includes inventory turns, and the gross margin return on investment, but more.”

Pouring another beer out of the pitcher, Paul continued. “We all know that inventory turns is one of our ‘must do’ metrics as buyers. The more you turn the inventory, the more times you make profit. And we know that margin percentage is important, the higher the percentage of margin, the more profit made for each inventory turn.”

The other two nodded as Paul took a sip of his beer. “If sales increase, we turn the inventory more and increase profit. If we increase the margin, we make more profit. So how do we increase sales?”

Patty and Rick looked at each other, and then answered together, “More advertising and broader assortment.”

“Now, if the buyer is able to get the vendor to agree to longer payment terms, in essence, we could have a chance to sell the product before we have to pay for it,” added Paul. “That helps cash flow, because while we may have possession of the inventory, we have not paid for it yet. If we sell it before we pay for it, the cash flow goes up, and the working capital turns faster.”

“I thought that we were to negotiate for fast payment discounts, like 2 percent in 10 days, net 30,” said Patty. “I’m confused by this longer terms stuff.”

Paul took a deep sip of beer before continuing. “I was too, until the Tools Merchandise manager explained this to me. If the vendor line moves swiftly, where we are turning over the inventory quickly, like in studs where we see a 40-plus turn, the discount terms coupled with the rapid inventory turn makes more cash. He said that the turn has to be better than 40 for the compound to work, since a 40 turn is about nine days of inventory.”

“I’ve got to have more beer for this,” said Rick, as he got up and carried the empty pitcher to the bar for another round. I was getting a little lost in the conversation because I did not understand what they meant by payment terms.

Paul smiled. “Yes, for services, 30 days is the standard. But with merchandise, we can negotiate when we have to pay the bill. We can say 30 days and we pay the invoice. We can also say ‘If we pay in 10 days we get to take two percent off the invoice.' That extra two percent is significant when the margins are low, like on lumber. With the high margins on tools, like 40 to 60 percent, that extra two percent does not mean as much as other factors.”

I thought about that as Rick returned with a fresh pitcher and poured everyone a new round. I’d never realized how many people were involved in the decisions that governed what we carried in our stores, how we bought it, and how we paid for it. Until now, I had just worried about how those changes affected what happened on my receiving dock.

At that moment, I realized how insignificant my operations were in the whole chain of events.