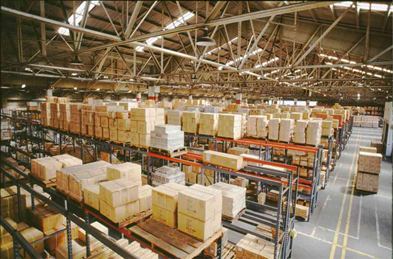 I want to share a story with you about my first dealings with warehousing/distribution and creating SKU locations in the mid-90s, when warehousing and distribution really started to pick up steam. I was an industrial engineer for a company called Wright’s Knitwear, and I was given the task of creating a warehouse with SKU selection for an abandoned textile factory. Hit the fun button, I thought. I knew this was not going to be easy.

The building had formerly been used for the purpose of sewing thermal undergarments. By the time I arrived, most of the sewing equipment had been sold. All that was left were pallets upon pallets of goods being pushed into the building, with no rhyme or reason dictating what product was being put where. Mind you, this was an irregularly shaped, two-story building, whose four walls did not quite make a perfect rectangle.

I took detailed measurements of all the floors and rooms that were to be used and created an AutoCad drawing. Next was the task of creating spaces in the building for the pallets and developing a location system with letters and numbers. The project itself was quite fun, and good experience for a young engineer. It was a success, as the newly-assigned locations in the building began to hold goods that could be tracked with a primitive Warehouse Management System. It was better than having nothing.

Although this task was fulfilling to me, I realized then that a great shift was happening in the world of manual labor and goods. Here, sewing workers had lost their jobs to a contracted company in Puerto Rico, but the goods were still needed back in the States. And, even though it was one of many projects, it opened my eyes to just how big warehousing, supply chain, and logistics would become.

There I was, in 2012. Since long ago, when I set up a SKU system in a textile mill, the shift that was then beginning has happened big time—manual labor is almost entirely sent overseas, and product needs to be collected and shipped in the US. I have had the opportunity to work in environments where it was my job to make sure product got through distribution centers as efficiently as possible, so the end customer (usually a retail store) could get their goods. Unlike the textile mill project, there is not much room for warehousing itself, as space is at a premium and goods need to keep moving, in one door of the DC and out the other.

Yes, we’ve come a long way in how we handle product. And I thank God for the technological strides we have made. Handling such operations is my passion. I can only look forward to whatever innovations we develop in the future. It is important not only to think about the near future, but to have the insight to determine in advance what will be needed in this chess game of supply chain and logistics. It’s a fun place, and I’d like to stay.

Warehouse Operations: The Heart of the Customer Experience