“Will gasoline and diesel reach $5 per gallon by year’s end?”

In March 2012, that question inspired us here at We Are The Practitioners to write several articles about diesel and gasoline prices in the northeast US. Six months later, and to no one’s surprise, a number of events kept gasoline and diesel from reaching the $5 mark.

The good news:  the on-highway average price for diesel in the Northeast did not hit $4.25 per gallon. In a few micro-markets the retail price did climb over $4.25, but for the Northeast market as a whole, the cost started to drop in May of that year, falling to under $3.75 per gallon in July.

In the March 2012 articles, we highlighted a number of factors, including the obvious cost of crude, behind the potential for $5 per gallon prices. We know that many of you have read the articles—the series has drawn over tens of thousands of unique page views since it appeared. "Will Diesel Ever Reach $5 per Gallon?" is the first in that series.

At the end of March  2012, I made a prediction: “My answer to the question above is a split decision. I don’t think gasoline is going to hit $5 per gallon, although it may go a little north of $4.50, but I think the imported CBOB and RBOB will help keep the prices down.

Diesel prices did not go north of $4.50, and the average price for gasoline did not break $4.00. Did I blow the prediction? Perhaps. A number of events had to happen for prices to rise that high, and if they all had hit, the prices would have risen. But not all of the bad that could have happened did happen. In the articles leading to that projection, I highlighted questions about things that influence pricing.

Refining capacity was the major concern in the spring of 2012. ConocoPhillips shut down its Trainer, PA operations in late 2011, and Sunoco shuttered the Marcus Hook operations in early 2012. 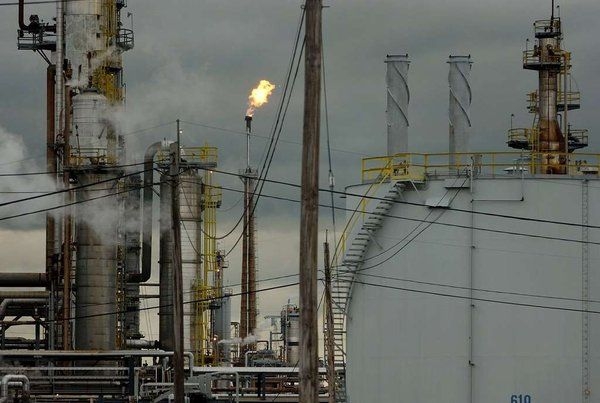 Sunoco lost over $1.4 billion in fiscal 2011 refining and selling gasoline, caught in the margin squeeze between the rising cost of Brent Crude and the dropping costs of imported CBOB and RBOB. The crack spread dropped so narrow that Sunoco lost about 15 to 20 cents per gallon of gasoline it produced. Those losses brought a huge change to the company, as it decided to exit the refining business, putting both Marcus Hook and the massive South Philadelphia refineries up for sale. When Sunoco made its announcement, it gave potential buyers until July to step up and buy the operations before Sunoco would shutter the South Philadelphia plant.

With Conoco’s exit, and Sunoco’s shuttering of Marcus Hook, almost a third of the East Coast’s refining capacity went off-line. While CBOB and RBOB imported into the region could offset the loss of that capacity, the loss of the South Philadelphia refinery would weaken supplies of both gasoline and diesel in the Northeast market. Hardest hit would be the Pittsburgh and Buffalo markets. Pittsburgh requires a special summer blend of RBOB, a blend made only by the South Philadelphia refinery. Buffalo and the rest of Western Upstate New York depended on the Sunoco Logistics pipelines, which moved finished RBOB from the South Philadelphia works to the western region of New York state.

An Airline Buys a Refinery, Vertically Integrating the Supply Chain...

In April 2012, Delta Airlines surprised the market when it said that it would buy the ConocoPhillips refinery in Trainer. When the deal closed on June 22, and Delta took the keys to the Trainer refinery from Phillips, financial reporters gushed about how Delta was the first air carrier to wade into fuel production in a bid to bring down costs. This deal eased fears of a fuel-supply shortfall in the U.S. Northeast.

Delta worked out a deal with JP Morgan, where Delta subsidiary Monroe Energy runs the plant, and JP Morgan acts as the oil trader, buying the crude and selling the finished product. Monroe spent about $100 million to convert the refinery to increase jet fuel output to 52,000 bpd and cut back on production of gasoline.

...and South Philly Gets a Reprieve

In late September 2012, Sunoco Inc. chief executive Brian P. MacDonald handed over the ceremonial keys to the company's Philadelphia oil refinery to Philip L. Rinaldi, the chief executive of a new venture called Philadelphia Energy Solutions. The Carlyle Group and Sunoco created the joint venture. Sunoco retained one-third of the ownership of the plant, and would be in the position to buy gasoline and diesel from the plant operations. Sunoco's retail fuel stations would be the refinery's biggest customer, and the refinery would be a large customer for Sunoco's regional pipeline network.

The deal saved 850 jobs and breathed new life into a sprawling 146-year-old plant considered by many in the industry to be too old to make fuel competitively. The refinery's transfer to Carlyle marked the end of over 118 years of fuel manufacturing for Sunoco. Carlyle saw a re-imagined future for the aged plant, one in which Philadelphia Energy Solutions takes advantage of new Marcellus Shale natural gas supplies to enhance fuel production. Carlyle’s capital investments would allow the plant to use shale gas to produce steam and electricity at a new co-generation plant. The co-generation helped lower costs and improved the plant’s ability to extract more gasoline, jet fuel, and diesel from each barrel of crude oil.

The biggest supply challenge — the loss of refining capacity along the Delaware River — did not happen. The Trainer facility came back to life, pushing more jet fuel into the market, changing the pressure on diesel prices. The Sunoco South Philadelphia operations got a new lease on life, averting a loss of capacity and changing the supply picture — and the likelihood of supply and demand pricing challenges.

Crude prices drive the cost of refined petroleum products. We know that to be true, beyond a shadow of a doubt. But what happened to crude prices in 2012? 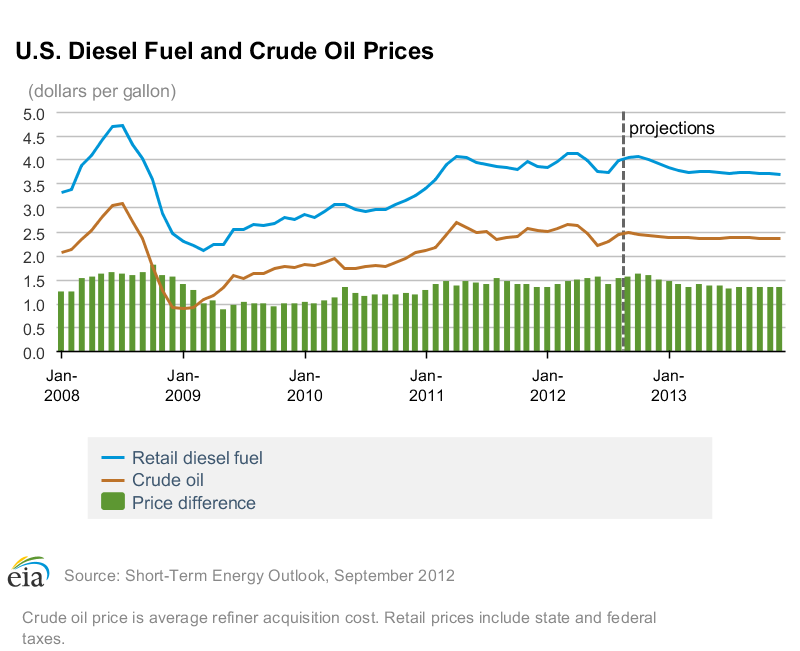 First you must ask a more important question: what kind of crude?

As the Department of Energy provides in the handy graphs and charts on the EIA’s web site, crude is crude. It is only reported as “crude.” Even as you dig into the numbers, the data shows only Brent Crude, the “reported” standard for pricing all other global crude. But crude is not just crude. Oil is a complex mixture of hydrocarbons and polymer chains. The chemistry of the oil from Alberta and Venezuela is different from oil from the Brent Field in the North Sea or West Texas. It takes more energy to refine a gallon of gasoline from Venezuela heavy sour than to pull a gallon out of the light sweet from West Texas. If a barrel of one kind of oil yields more fuel than a different kind of oil, the cost per barrel of the better oil should be higher. 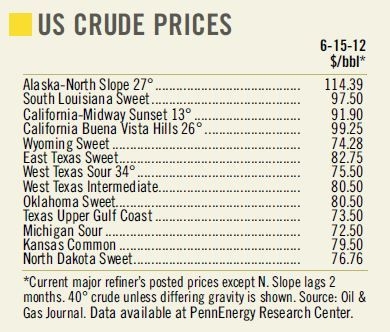 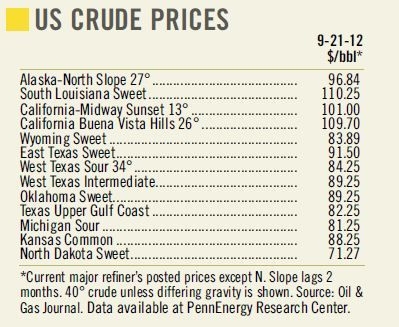 You can see that price differential in the crude prices — about a $5 difference between West Texas Sour and West Texas Intermediate.

The blended cost of the crude in the DOE charts from the EIA is based on average refiner acquisition costs. So the price of oil is the price as the refiners bought it — how much of each kind of crude oil and at what price it was for that day — averaged based on sampled reporting by the refiners. Since the DOE price of crude is based on the oils used, factors other than the prices of oils in the trading pits will affect the price of crude. Nonetheless, looking at the trend lines, the price of crude ran up with the tension in the Middle East, buffered by the rise in domestic production. Prices dropped in the summer or 2012 from a combination of increased domestic production and a reduction of tension in the Middle East.

Imagine that a refinery is a machine that processes crude oil into different petroleum products. The refinery machine is set up to process a narrow range of crude products into a narrow range of finished products. Some refineries have just one or two process flows, so they are limited in the kinds of crude they can efficiently process. There are huge refineries where the owners made major investments in equipment and processes to broaden the range of crude they can process, and the number of finished products they can make.

The financial success of a refinery depends on a combination of market demand for the products the refinery can make, the available processes in the refinery, the efficiency of the refinery processes, and the supply of the right crude oils. The refinery manager’s skill in adjusting the process to optimize the conversion of crude into product is the key to maximizing the profit—or minimizing the loss—from operations. Even with great management, market conditions can create conditions under which even the greatest managers will fail, and average managers get crushed, as we saw in 2012 with the Sunoco operations at Marcus Hook and South Philadelphia.

As we illustrated in our article about Sunoco’s 2011 fiscal losses, "How Does an Oil Company Lose Money?" there are multiple factors that can limit the amount of crude a particular refinery can produce.

The physical processes of the plant are just one factor—a factor that can change with engineering and capital investment. What happened with Sunoco was a lack of available capital to make the changes, and no promise that the changes would alter the market pricing.

The Sunoco operations had to use light sweet crude, and the location of the two refining operations brought pain to the company—a combination of market factors that created massive losses.

⦁    The cost to convert to use heavy oil with higher sulfur was beyond the short-term capital resources of the company.

⦁    Crude oil pipelines do not run to the Sunoco refineries, so the lower cost domestic crudes could not get to the Sunoco operations.

⦁    The Sunoco operations did not have the handling facilities to take trainloads of crude, so rail shipments could not bring domestic oils to the refineries.

⦁    European refineries made more RBOB and CBOB than their local markets could consume. These refineries, many optimized to use less expensive heavy and sour crudes, unloaded the gasoline into the New York market at prices below Sunoco’s ability to turn Brent crude into gasoline.

Other oil companies closed Delaware River refineries in 2009 and 2010. Managers of the closed facilities, backed by investors and some state economic incentives reopened the shuttered operations, and made the investments to process less expensive heavy sour crude. The production from those operations came online early, helping curb the finished product shortages that summer and keeping prices down.