The Cause of the Fast Burning Lights

About six months after the team finished the replacement project (see Part 1), lamps started to fail in the second pick module. The electricians hired for the install work inspected the fixtures and ballasts. The ballasts were working as they should, but the lamps were still dying prematurely. The warranty for the ballasts had run out, as did any warranty on the lamps. Now my client’s customer faced the dilemma of funding a continuous lamp replacement program sooner than expected.

The lamps were lasting less than 5,000 hours when they should have lasted closer to 20,000 hours. The customer asked about lamp replacement under warranty, and my client, concerned about the risk, again contacted me to find the cause for the premature lamp death.

My first morning on site, the module was busy with foot traffic as employees with carts moved through the aisles. I followed pickers through their routine, noticing when the lights in each aisle turned on and off. It appeared that either they burned all the time, or that they turned on before the picker entered the aisle. As I walked around, I did not find any failed lamps in the main aisles, only in the picking aisles.  I saw occupancy sensors only in the pick aisles – the main aisles did not have any. That observation told me that the problem had to be the cycle rate.

Next, I watched just six pick aisles, observing the cross-aisle traffic. I noticed the pick aisle lights were turning off right after a picker left the aisle. Then, I noticed something strange – the lights were coming back on when nobody was in the aisle. I was scratching my head wondering why, when I noticed how warm it was in the module, and how everyone but me was wearing shorts. (This will be important later.)

I continued to observe and saw someone in the main aisle walk past a picking aisle. He walked past it, but did not go in. The lights came on. This did not happen all the time, but it happened a lot. I watched three aisle intersections for 15 minutes. Sure enough, as people walked by the end of the aisle, the lights came on, and about 10 seconds later the lights went off. 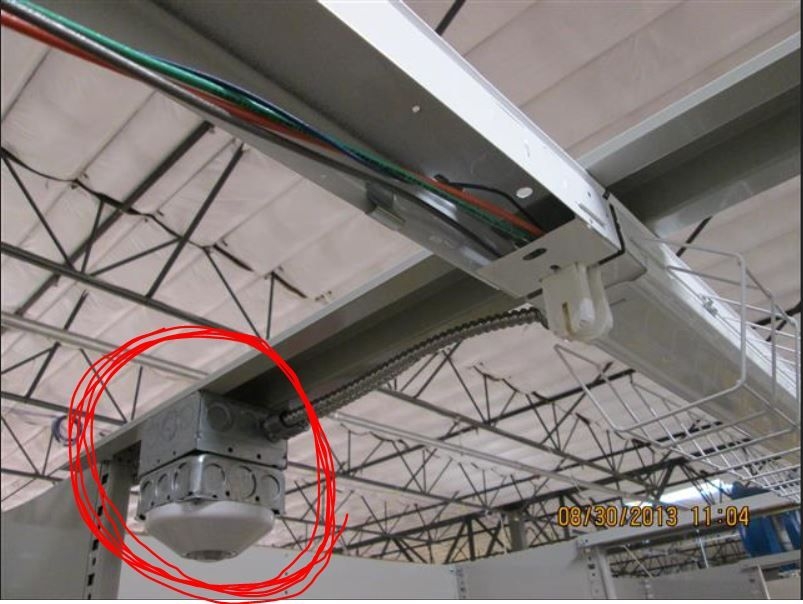 Lamps failed because the occupancy sensors were picking up the cross-aisle traffic.

Looking at the occupancy sensor specification, I learned the motion detectors sensed activity 36 feet away. Most of the pick aisles were 40 or 48 feet in length with the motion sensor located in the dead center of the aisle. With a 36-foot range either way, the motion sensor not only picked up traffic in the picking aisle, but it also sensed people walking in the cross- aisle.

Occupancy sensors turn lights on when they detected heat motion. I watched and saw that the lights did not come on when someone wearing long pants walked by but lit up with someone wearing shorts. A human in shorts will give off heat that sensors can detect. Another human in jeans, will not emit enough heat to be detected. The customer specified a “smart” sensor to assure the lights remained on while the aisle was occupied. The sensors “learned” by measuring the motion it “saw” and the time of no motion. As the sensor “learned,” it would adjust the “lamp on” time. The shorter the observed motion time, the shorter the “lamp on” time.

Once the lights are on, several things could happen. If a picker was standing still, as if picking a product, a motion detector could decide to turn off the lights. This idea works fine if the data is from the motion that is actually happening from people who are in the aisle. However, since the occupancy sensor detected people out in the cross-aisles, the program burn time became very short.

I asked pickers if they had a problem with lights going off while they were in the aisle. Everyone said lights would go off but it wasn't a problem since all they had to do was wave a hand and they would come back on.

Here was the root cause of the premature lamp failure. The lamps were cycling hundreds of times a day, on and off, on and off. The sophisticated smart occupancy sensor was burning out the lights by picking up cross-aisle traffic. 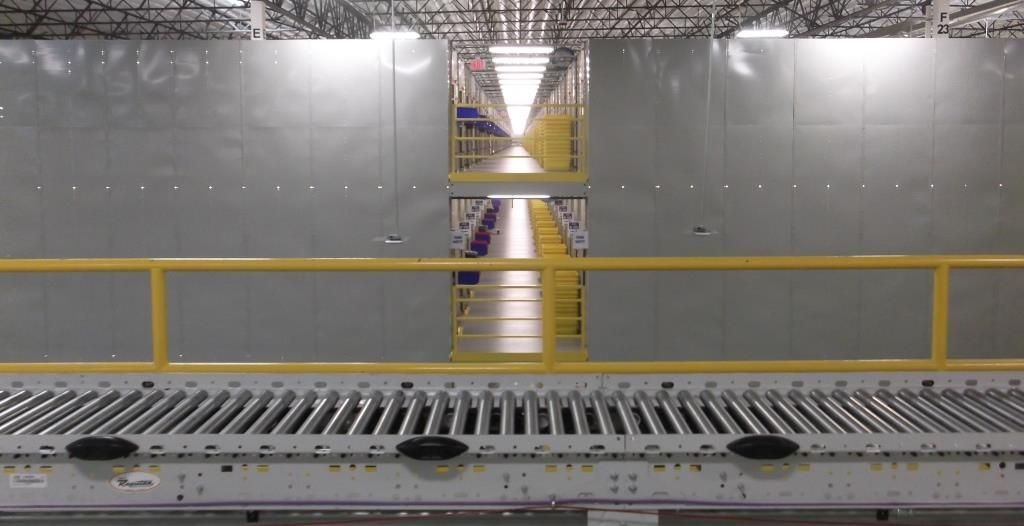 Fluorescent lamps are expensive to replace. The cost of the lamp may only be $3 - $4, but does not include disposal costs. Fluorescent lamps contain mercury, and environmental regulations require special disposal, costing $1 - $2 per lamp.

Lamp replacement is also more than just changing out lamps. It includes time spent loading carts with lamps, moving around with a cart and a ladder, setting up the ladder, changing the bulbs, moving the whole rig and repeating the process. A good apprentice electrician can replace about 20 tubes per hour. At $20 an hour labor cost adds up.
The customer specified the occupancy sensors in an effort to save money. The occupancy sensors ended up costing the customer more money. Our simple analysis showed that leaving the lights running actually cost less in energy costs than the cost of replacing lamps twice a year.

We recommended to the customer that they change the sensitivity of the occupancy sensors, defeating most of the programming. For new fulfillment centers, we also advised the customer to begin using LED light fixtures as replacements for fluorescents, or consider using LED lights configured as fluorescent tubes as a longer-term solution. 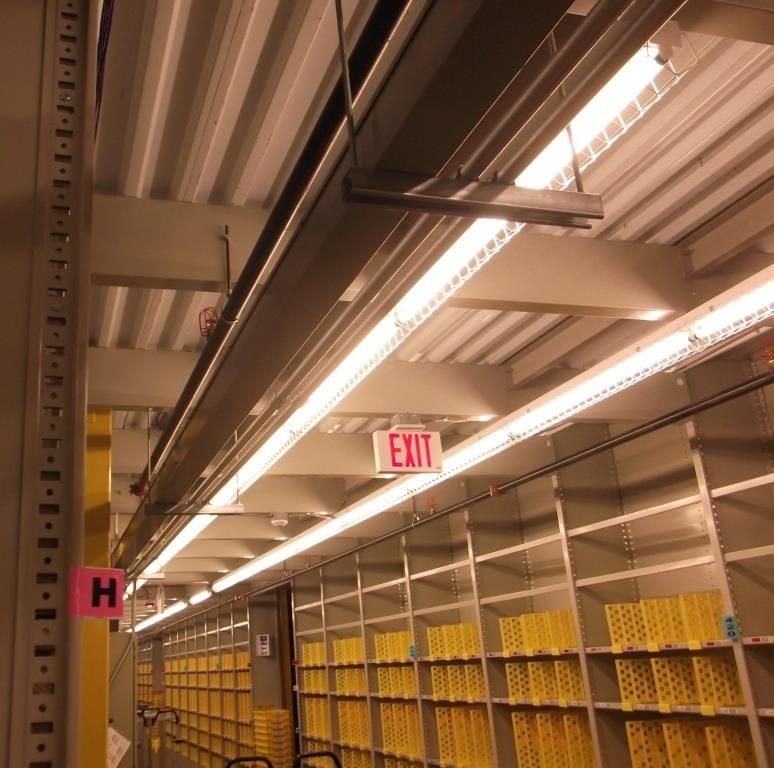 Report of the root cause including video snips, research notes, losw cost solution to current operations and recommendations for future operations.

Are the energy (and money) saving features of your facility actually costing your company more money in the long run?  Find out with one of our facility assessments.  Your ROI could be substantial.  Give a call to learn more about how we look at the Total Cost of Operation for warehouse and industrial systems. 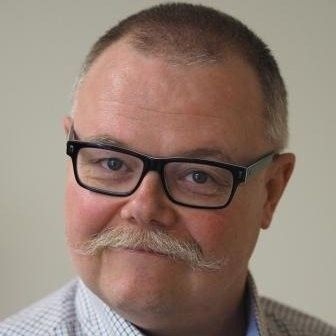