That is not good enough for Mica or Shuster.

On June 22, 2011 Mica introduced legislation that would:

In a news release Mica states, "We plan to introduce legislation to separate the Northeast Corridor from Amtrak, transfer it to a separate entity, and begin a competitive bidding process that would allow for a public-private partnership to design, build, operate, maintain, and finance high-speed service. Our plan would do so in a dramatically shorter time, in closer to 10 rather than 30 years, and at a fraction of the $117 billion cost proposed by Amtrak, while creating new jobs."

Congress created Amtrak with passage of the Rail Passenger Service Act of 1970. There was a reason for the action, the still-private but heavily regulated railroads wanted to drop the money pit of passenger service. They needed to—the railroad industry as a whole was weak, and many railroads were failing financially. Congress, in its typically self-serving zeal to promote commerce and jobs in their home districts, had to act. So the government jumped into the railroad business and created the subsidized, but for-profit, corporation.

Therefore, in 1970 the nation’s railroads sold their passenger service and assets—mostly worn and tired equipment in poor to fair condition—to the government. At the time, Amtrak did not even own the NEC; the railroads that had given up on providing passenger service still owned the tracks. As Penn Central, and then Conrail absorbed the New Haven and the Boston and Maine, passenger service quickly died or was rescued locally by the states. In 1976, as part of the formation of Conrail, ownership of the land and track assets the old PRR and NH sections of the NEC transferred to Amtrak, and large sums of money transferred from Amtrak to the bankrupt railroads. 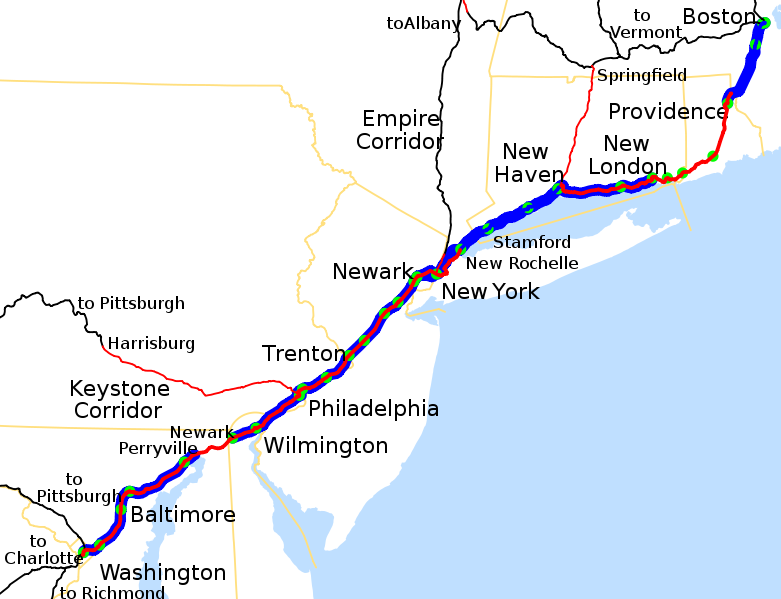 Right now, Amtrak owns the sections of the NEC from Washington DC to New Rochelle, NY, and from New Haven, CT to Providence, RI. New York State owns the track from New Rochelle to New Haven, and Massachusetts owns the track from the Rhode Island border. Freight moves on the tracks. So does commuter traffic in Maryland, Delaware, New Jersey, New York, Connecticut, Rhode Island, and Massachusetts.

So, Why the Noise?

The for-profit corporation has become a lightning rod for Republicans who oppose President Obama's $53 billion plan to create a nationwide intercity high-speed rail network. And it is not enough just to oppose. A sharp congressman must make his mark with counter proposals.

The idea to split the NEC away and form a private enterprise to operate it is not new. In September  2005, the U.S. House Subcommittee on Railroads, then chaired by U.S. Rep. Steve LaTourette (R-OH), listened to proposals that sounded very much like what Reps. Mica and Shuster now propose.

Of course the introduction to this new proposed legislation is full of invective, statically propped up assertions, and often-repeated opinions disguised as facts. Rep. Shuster states in his press release supporting the measure, “We’ve tried it Amtrak’s way without success for nearly 40 years, and it’s time to go down a new path and inject private-sector competition. It is time to deregulate America’s passenger-rail system, and the Northeast Corridor presents the best place to start with private investment and market-based ideas."

If you clicked on the video above you would see what high-speed rail looks like here in the US, as an Accela runs past at 150 mph. The trains can go faster, but the track cannot support it. And mismanagement is not the problem. The real issue is that the NEC was never designed for HSR. The areas where the Accela trains get to run at high speed are laid with new track, built just for that purpose—like the track in the video.

Mica cites Amtrak's "dismal record" and "lack of achievement in this incredibly valuable transportation corridor," as justification for taking action. Rep. Chip Cravaack (R-MN), the freshman who ousted Chair Jim Oberstar from his seat last fall, stated in the first hearing on the subject on June 23, “Amtrak is broken, and the other fact is that we’re broke. I hear about investment; where is that investment money going to come from?”

I could ask the same thing about a private venture. Where is the money going to come from?

Mica has ground Amtrak to the stone many times. In the June 26 hearings, Mica introduced Amtrak CEO Joseph Boardman with an overture of apology:“[Boardman] takes a beating from time to time, sometimes from me, unwarranted, and I apologize publicly for that, but he does as good a job as he can with the cards he’s dealt.” The Amtrak CEO challenged Mica’s previous attacks on Amtrak, saying, “The stability of Amtrak and its future are critical to have any confidence in us as a centerpiece. And this legislation, and the way that we’re characterized on a regular basis, doesn’t sustain that in the investment public. And it’s not accurate, Sir.” Boardman went on to say that Amtrak was “a world leader in terms of cost recovery and efficiency.”

That is the real problem. If Congress would let Amtrak operate like a real for-profit private business, would there be a better system? History has shown over and over again that the phrases “for-profit” and “government” are mutually exclusive.

One point to remember is that Amtrak does not make a profit. Amtrak's profitable Northeast corridor operations subsidize routes elsewhere in the country. Amtrak is required to provide unprofitable service to sections of the country that do not have the demand to support the trains it must operate. As long as Congress insists that Amtrak provide these services as a ward of the state, Amtrak will not have the cash to invest in building high-speed rail service in the corridor that best supports the service. 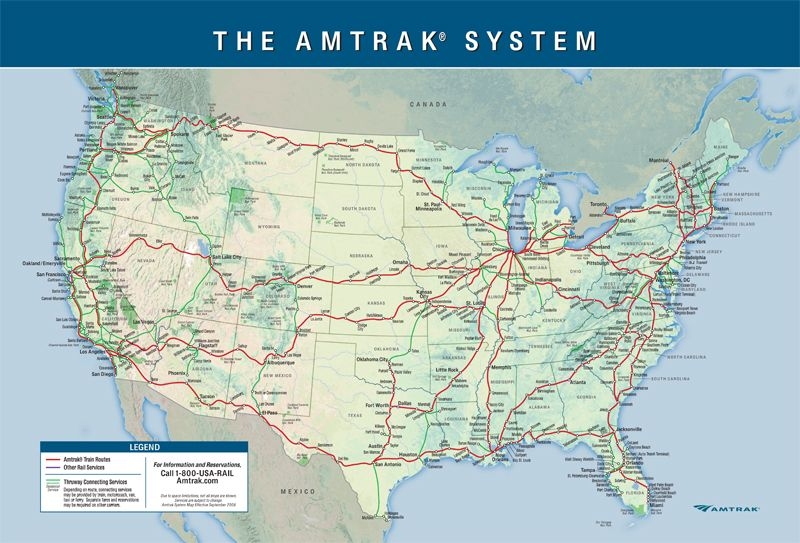 Economics, not nostalgia or politics, should determine where Amtrak operates. Right now, it's often the opposite. Case in point is the many routes, like the Cardinal that connects New York to Chicago via Washington DC, Charleston WV, Cincinnati OH, and Indianapolis IN. The profit NEC generates from the cross-subsidy supports trains like the Cardinal. Rep. Nick Rahall (D-W.Va.) defended cross-subsidies of the Cardinal line that connects New York and Chicago, running through his state.

“The Cardinal will suffer a fatal blow under this proposal, along with many other vital routes that connect rural areas of our country, coast to coast,” said Rahall. “Right now, Amtrak serves about 40 percent of America’s rural population. All of this service would be lost under the draft legislation.”

The reality of this measure is that it is a fantasy. IF a private, for-profit company really wanted to operate a high-speed rail (HSR) network in the US, it could not afford the cost of the assets, namely the real estate, the plant and equipment. The only other profitable HSR networks in the world that are operated by private companies are in Japan, and those got a huge leg up from their government long ago. Here in the US, distances are too great, and the cost for the right is way too high.

In fact, many of the railroads in the US can thank a generous government that granted land to the railroads in an initial investment in creating commerce—in the 19th century. That land, vast swaths of it, helped line the pockets of many a tycoon who built the rail lines quickly and cheaply to collect the land and then cashed in on the westward expansion.

The Real Reason to Stand Up and Say, “NO”

Any private company engaged in a public service—a railroad, an airline, a public utility—should be concerned about this measure for a number of reasons.

The fifth amendment of the constitution protects us against the taking of private property for public use without just compensation. Some members of Congress suggest that this proposed legislation is unconstitutional under the historically trampled takings clause. In the past three decades, local and federal governments have used eminent domain to take private property for “public use” and have awarded the same property to private developers for redevelopment. The Supreme Court affirmed the legality of this practice with Kelo v. City of New London. Since then, many states have strengthened their laws to prevent this practice.

In the June 23 hearing, Amtrak CEO Joseph Boardman affirmed his understanding that Amtrak would receive no compensation at all for the corridor or the trains. “In the history of a ‘taking’, that’s not what we do in this country, and that’s not what happened when the corridor was transferred to Amtrak back in 1976,” Boardman said. “The private owners were paid substantially, even though they were bankrupt.”

Amtrak is an example of creative government. It is an exotic legal entity, a government corporation with common shareholders and party to numerous contracts with states, cities, suppliers, and labor unions, and the standard liability of any other private business. Still, Amtrak is a company that owns substantial assets. The assets in question—the NEC, the trains on the NEC, and the substantial investment in infrastructure in track and plant—create most of the company’s profit. How much are those assets worth? The numbers are not broken out on the Amtrak 2010 Consolidated Balance Sheet, but there is over $10 billion net of long-term assets, most of which are the NEC.

This action by Rep. Mica is an attempt to claim those assets, using the accusation of mismanagement on Amtrak’s part as justification, to sell those assets to some unknown set of private bidders who will pay for the privilege of operating this once profitable rail system.

But book value on the balance sheet is not the real value of the asset. No one knows what the NEC is really worth. How much revenue can be generated with a true HSR line that ties the major East Coast destinations together? That is an unknown. Unless there is really a private going concern that is willing to make an offer, this is nothing but political posturing. If Congress was serious about making Amtrak efficient, Congress would release it from its oversight and meddling. As a real private company, Amtrak could shut down the money-losing routes, focus on the money makers, and perhaps make HSR happen.

What would keep other congressional leaders, now or in the future, from determining that a business should give up its assets because of a "dismal record" and "lack of achievement in this incredibly valuable ____________________"?

You fill in the blank.

Commenting on the Proposed HOS Rules