Logistics as a Matter of
Life and Death

As a science, discipline, and art form, is Logistics serious enough to merit its own religion? Or are we adherents to the Universal Religion of Logistics simply over-glorifying a humble vocation with the simple purpose of transporting goods and people from Point A to Point B?

I say Logistics is very serious. In fact, I say it's a matter of life and death—and there are at least 300,000 dead French soldiers I'm confident would agree. By the time Napoleon Bonaparte turned his eyes to Russia in 1812, his grande armée consisted of nearly half a million men. It was the largest military force ever assembled in the history of Europe. Most of the continent was within the domain of the French Empire, with the notable exceptions of Britain — protected by 21 miles of channel waters and guarded by the world's most powerful navy at the time — and Russia, which lay many hundreds of leagues to the east across barren, inhospitable lands, a far cry from the lush, agricultural fields of west and central Europe.

Seeking to thwart the economic alliance between those two remaining European powers not under his fist, Napoleon invaded the one his land-based army could march upon: Russia. But the egomania that spurs despots toward aggressive seizures of power also drives them to overextend their reach, often with disastrous results. Napoleon serves as a prime example, for this was to become one of history's most spectacular military failures.

One could not even assemble such a massive army without a plan for provisioning them. Men must eat at least once a day and drink more often than that. Napoleon understood that as well as any general; he certainly couldn't have conquered most of Europe with hungry troops. So in preparation for his invasion of Russia, he and his quartermasters planned thoughtfully and scrupulously. The thrust into Russia was to be supported by 17 train battalions made up of 6,000 supply wagons that would provide 40 days of provisions to the entire force. Any delays in their delivery or any needs beyond that allotment would be covered by food and supplies to be seized from towns and cities en route. 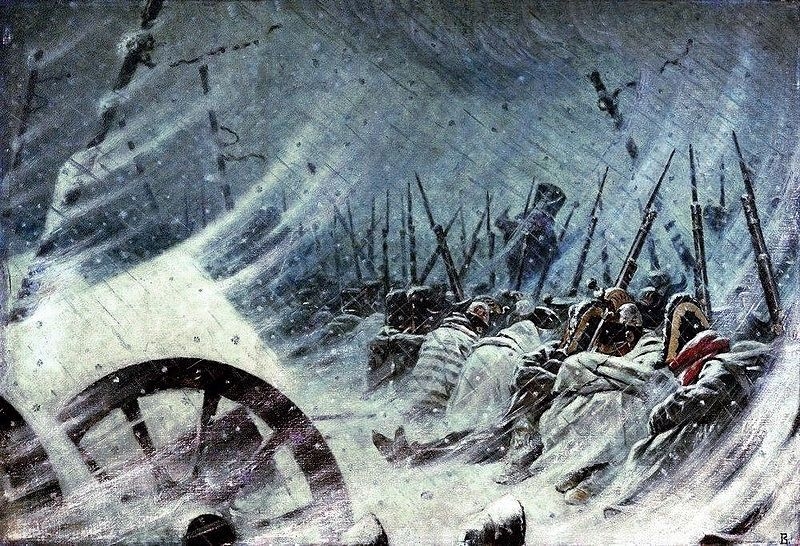 Feeding off the enemy and relying upon the fat of the land had been a highly successful strategy throughout Napoleon's career. The plan was rather straightforward:  in June, Napoleon would march into Russia, confront the Russian army, engage them in open battle, win a decisive victory, bring the Tsar to his knees, and return triumphant to Paris before autumn. In fact, the remnants of the grande armée would not return until mid-December.

It was said many years later by Moltke the Elder (who was only eleven years old at the time) that no plan survives first contact with the enemy. In this case, however, Napoleon's plan did not survive the lack of contact with the enemy. In what became a continental game of cat and mouse, the Russians refused to engage Napoleon, retreating deeper and deeper into their forbidding territory and burning everything of use in their path, depriving the grande armée of any local sources of resupply. The French would arrive at a city ready to fight and plunder, only to find it evacuated and razed. Yet despite the supply battalions' inability to keep up with the main army's forced march through impossible terrain, Napoleon pressed forward in pursuit of his adversary, far deeper into Russia than had ever been planned for.

His men had already begun to starve when winter arrived, and they were sorely ill-equipped for the bitter cold. Napoleon pursued the Russian army all the way to the capital, where once again he found the city nearly abandoned and only ashes left of its stores and supplies. Some 440,000 men crossed the Polish-Russian border, but only 100,000 survived to capture an empty Moscow. With his men starving, it became blindingly obvious to Napoleon that his defeat was at hand, and retreat was his only remaining option. 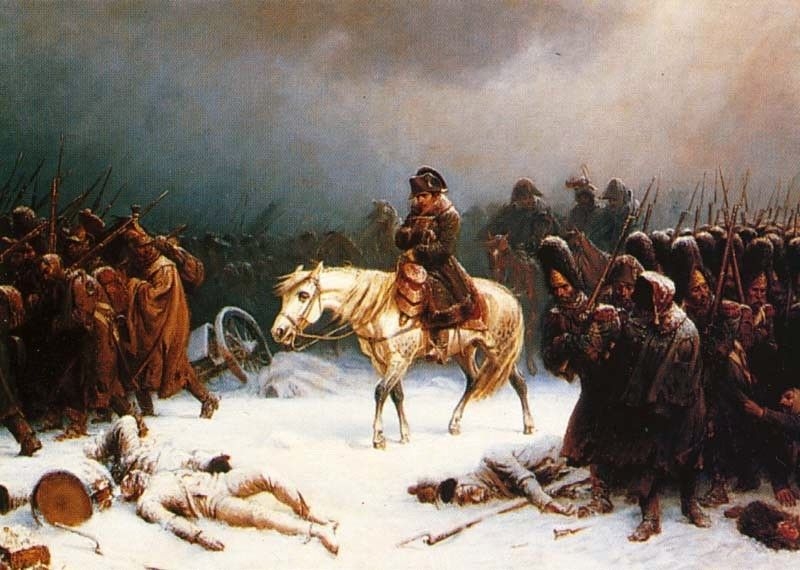 Sometimes the only way to win a game is not to play, and over the course of those three months, the outnumbered Russians only engaged Napoleon in a few minor skirmishes and a single major battle (and not decisive one). All told, there were fewer than 100,000 French battle casualties. Yet only 10,000 men — about 2 percent of the original force — survived to see Paris again. Hundreds of thousands of deaths, and ultimately the collapse of an empire, are owed not to some grand Russian victory in battle, but to an epic failure of logistics. The vast majority of Napoleon's grande armée starved, froze to death, succumbed to illness, deserted, or committed suicide on the route to Moscow, a city they never planned to capture.

Below I present to you what is easily the most extraordinary and compelling informational graphic ever created. Devised by French civil engineer Charles Minard and published in 1869, the Carte figurative des pertes successives en hommes de l'Armée Française dans la campagne de Russie 1812-1813 [Figurative map of the successive losses of men in the French Army in the Russian campaign] depicts the route Napoleon took to Moscow mapped out both geographically and over time by the peach-colored band. The width of the band represents the size of the army with, at full scale, each millimeter of breadth corresponding to 6,000 men. The black band represents the same force in retreat, annotated with a temperature graph below. The temperature graph starts at the right with the 18th of October, marking 0 degrees, and follows the retreat to the left until the 7th of December, marking –26 degrees.

To this day, it gives me chills to follow the grande armée's path to devastation.

Napoleon's military genius is unarguable, and his fierce dedication to sound logistics was key to his success in conquering most of continental Europe. Thus, we are left only to conclude that, having already witnessed the Russians' brilliant strategy of continuous non-engagement and scorched-earth tactics, and knowing full well that his invasion plan relied to a significant degree upon the army's ability to live off the land as it advanced, his compulsion to press on to Moscow was a symptom of narcissism and unrestrained hubris. Only hubris could corrupt such a mind as his into ignoring the very foundation every military engagement is built upon:  logistics.

It was, after all, a matter of life and death.