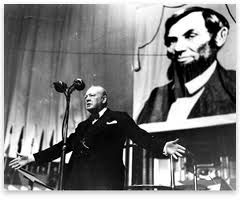 “We have before us an ordeal of the most grievous kind. We have before us many, many long months of struggle and of suffering. You ask, what is our policy? I will say:  It is to wage war, by sea, land, and air, with all our might and with all the strength that God can give us; to wage war against a monstrous tyranny never surpassed in the dark, lamentable catalog of human crime. That is our policy. You ask, what is our aim? I can answer in one word: It is victory, victory at all costs, victory in spite of all terror, victory, however long and hard the road may be.”

This was Churchill's first speech to the House after taking control of the government. His statement set a clear policy and purpose. He created a compelling long-term vision that was cast in a single, clear, simple paragraph: We will fight, wage war, with God on our side, until we achieve victory, no matter how hard it is or how long it takes. This clear statement did not come after weeks of study or debate, Churchill started off the show with a clear vision.

Churchill was blunt and brutally honest about what it would take; he did not sugar-coat any of his statements.

“I would say to the House, as I said to those who have joined this government:  I have nothing to offer but blood, toil, tears, and sweat."

No punches pulled. Expect nothing but pain.

In the face of fear, when almost 80 percent of the population of Britain supported settlement with Nazi Germany, Churchill turned the tide of public sentiment. With two clear paragraphs, he set an audacious and defiant goal, and his country was victorious in the end.

“Even though large tracts of Europe and many old and famous states have fallen or may fall into the grip of the Gestapo and all the odious apparatus of Nazi rule, we shall not flag or fail. We shall go on to the end. We shall fight in France, we shall fight on the seas and oceans, we shall fight with growing confidence and growing strength in the air, and we shall defend our island, whatever the cost may be.”

Clearly spoken. While others have fallen, the British people will not.

It was a fight to the finish, and Churchill predicted that it would be the “odious apparatus of Nazi rule” that would fall first—not the British people.

"These are not dark days; these are great days...the greatest days our country has ever lived,"  he said in 1941, as the British fought back against the Nazi Blitz and the RAF lived “their finest hour.”

Whether he was speaking to the House of Commons or to the British public, Churchill spoke with clarity of purpose. In his dictation, in his meetings, in his letters, he chose his words carefully to paint the clearest picture of what he wanted and of what he expected. In those rare times when his instructions were unclear, he would redouble his efforts to define and clarify his purpose.

As leaders we must speak clearly. Our subordinates, our stockholders, our partners, our suppliers, and our customers deserve clear messages that define not only what we are doing, but also why we are doing it. Transparency is often mentioned as a desired quality in management and communication today—and it is sadly missing in so many instances.

When we issue unclear instruction to our partners, our vendors, our carriers, we cause them to lose certainty, to lose trust in what we are telling them. Clarity is needed at all levels of communication, from the setting of strategy (the mission and purpose) to the definition of tactical plans and the instructions of execution. The more unclear the strategy, the mission, the purpose, the plans, or the instructions, the more likely there will be a failure in a complex operation.