Behavior 10:  Publicly Visible, He Took Risks
to Be Present and Established His Humanity and Humilty 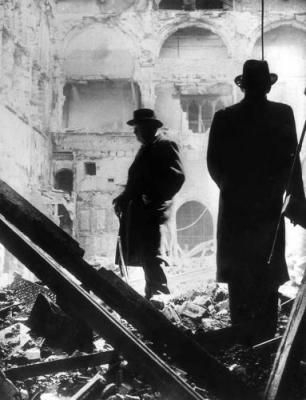 Winston Churchill was 65  years old in May 1940 when he assumed the office of Prime Minister of England. The country was at war. In a few months Britain would be fighting for its survival. It would take a man of presence to become the wartime leader the world needed.

In today’s world of instant communication and abundant news, we take for granted as normal the overexposure that our world leaders receive. They are very public and we expect them to be very public. Much of this public exposure is somewhat staged, controlled. It has not always been that way. History has a way of punishing leaders who make themselves too available to the public. Abraham Lincoln is but one example. Another is Theodore Roosevelt, who became president after William McKinley was assassinated and was the survivor of an assassination attempt himself. Because of the high risk that any world leader faces, it becomes harder for those leaders to make personal public presence be felt.

Not that it isn't done in modern times. George W. Bush’s surprise visit to the troops in Baghdad is but one example of how modern leaders can make that personal presence be felt today. But modern leaders must all defer precedence to Churchill’s practice of being public, being very close to the public and being very close to the key players. One cannot underestimate the power that that personal presence can make in changing the direction of events.

Presence in the Battle…

Immediately after taking office, Winston Churchill made a series of daring and dangerous trips into France to meet with the French military and political leaders. He made the trips to help bolster the resolve of the French to resist the German advance. Even in the face of what became a lost cause, Churchill understood that his physical appearance and personal presence in front of the French leaders would carry far more power and weight than some written message. Churchill knew it would be much harder to ignore his message if he delivered it personally.

As the Battle of Briton started, the Germans focused on manufacturing for a limited time, and continued to focus on air bases in an attempt to destroy the Royal Air Force. In frustration and in an attempt to break the will of the British, the Germans turned to bombing the cities to inflict terror. The bombing raids destroyed swaths of the cities, injured and killed many civilians, and had the potential of driving the will of resistance of the British right into the ground. Churchill clearly understood that the morale of the public was his best weapon in the last reserve of energy that his country had. 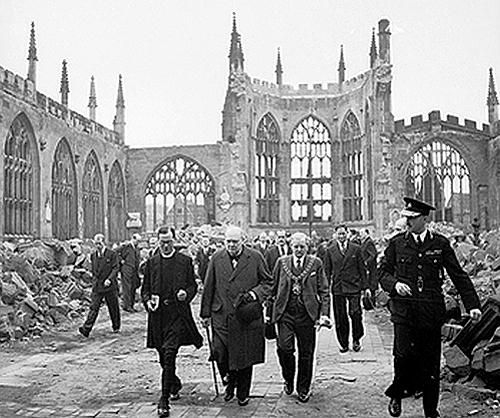 Always acting with great effort and sometimes physical pain, Winston Churchill often appeared among the bombed out buildings of southern English cities. Because of the limited range of the German bombers and fighters, most of the air war focused on London and the South of England. What that meant was those cities got repeated visits and daily bombing raids. Churchill did not have to travel far to be able to witness the damage and destruction the Germans were bringing to his home country.

Every one of his visits to the bombed out cities boosted morale. His “V” for victory sign was embraced by the public. There were times early in the war, the stark contrast of the destruction of people's homes to the buoyancy of their morale upon seeing him would bring Churchill to private tears. Churchill spoke often about the incredible will of the British. He openly talked with people with tears in his eyes about the suffering that he could see them having to live with. When the public saw him with tears in his eyes, they realized the humanity and compassion that their Prime Minister had for their suffering. With that, many were willing to live through the bombing hell because they understood that their leadership greatly cared.

Nothing Is Stronger Than Being There

At great risk, Churchill would travel extraordinary distances to see and speak to the British troops. Churchill clearly understood the power of his presence as a morale booster to the troops. Of course, in private, he would meet with their leaders and discuss the strategies and the challenges that were being faced in the battlefield. But in those same conversations, Churchill would inquire about the morale of the troops and ask,"What can I do for our soldiers?" He would go and press the flesh with the soldiers; not only British, but Polish, French, Algerian, White Russian, and any of the other nationalities involved in opposing Nazism.

Churchill often demanded to see the weapons and machinery the British and allied troops were going to deploy. Part of his overall responsibility as leader was to make sure that his fighting forces had every asset available to them and that those assets worked. There are numerous stories about Churchill's visits to the proving grounds to review the operation of tanks, trucks, aircraft, guns, canon and many other forms of weaponry that were being created. He wanted to see with his own eyes the destructive power and the effectiveness of the weapons. If a weapon did not live up to the billing that he was given, Churchill was not bashful in speaking out about his disappointment.

Throughout the war, Churchill traveled to visit troops and world leaders. Throughout the war Churchill's health was fragile. He was 65 when he took over the office of Prime Minister; he suffered heart attacks, contracted pneumonia and other illnesses due to exhaustion from that travel. Records show that he suffered a mild heart attack in December of 1941 while visiting President Roosevelt at the White House. Nevertheless, Winston Churchill traveled over 100,000 miles during the war years to meet with the leaders of that age. 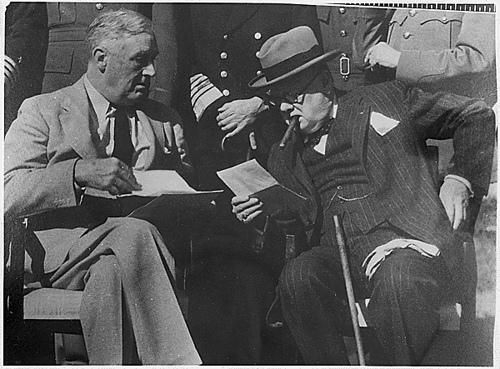 At times, these travels would be in secret as he traveled under his favorite alias of Colonel Warden. Other times, his appearances were very public as he would meet with Roosevelt and Stalin at Yalta, and later Stalin and Truman. In 1944 Churchill left family Christmas celebrations and flew to Athens, Greece, where with the backdrop of civil war gunfire bombing them, Churchill brokered an agreement between the fighting factions. Churchill understood that his personal interventions would succeed where remote, written efforts would fail.

Churchill understood the power and speed of personal presence, of "being there."

How Can a Supply Chain Leader Apply “Being There”?

Being present is a concept that some leaders take for granted. It is more than just being physically present. Presence also requires engagement.

Have you experienced a time where you were reporting to your supervisor or manager and they didn't seem to be paying attention? Were they present for the discussion? Physically yes, but their attention was elsewhere. So the answer is, no, they weren't present. How about the last time that someone you lead was speaking to you and you weren't able to remember five minutes later what they were saying? Were you present?

There are times when it is important to not only go and see what is going on, to view the lay of the land, but to also listen and experience what the people on the scene are experiencing. Sometimes presence means that you must listen and understand the emotions and concerns of the other party. There are those that believe that business has no place for emotion; a horrible error in judgment. Business is the ultimate human game and to deny the reality of emotions in any human endeavor is unrealistic.

One of the Most Misunderstood Forms of Communication Is E-mail

In general, most people are very poor writers, and worse, poor readers. It takes an extremely talented and skilled writer to choose the right words in the right order to clearly convey a message that is rich in information. What adds to the challenge is that most people today possess a weak vocabulary and are somewhat unable to critically read a written document.

If you as a leader want the utmost effectiveness in your communication, you must make physical contact with your audience. There is no better way for the full exchange of ideas and emotions to take place between two people than a face-to-face conversation. It is in those face-to-face conversations that a leader has the opportunity to not only clearly express themselves but also they can instantly determine the quality of the reception. It's much more difficult to tell on a telephone if the other party is truly present in the conversation or not. But you can definitely tell if they are paying attention if you are face-to-face.

Earlier in this series we touched upon Churchill's insistence that all orders and instructions be made in writing. But what's also important to realize is that Churchill made an incredible effort to have meetings and discussions with key people in forming what a particular decision would be. So, distilling Churchill's behaviors into a simple formula:  discuss the options, make the decision, and document the action to be taken in writing.

Winston Churchill presence in the battle being there