Better Light: At What Cost?

There are four ways to make a work area brighter:

Do you have a favorite spot to read in your house? What kind of light is there? While some of us may have a dedicated reading lamp, others may have to contend with the décor that our spouses chose. The lamp where my father sat to read used a three-way bulb, which allowed him, at the turn of a switch, to crank up the wattage of the bulb from 50 watts to 150 watts.

We can do the same thing in the warehouse. Some developers go cheap, using 250-watt metal halide fixtures. Changing out the fixtures to 400-watts is one simple solution, with a cost. Unlike the old incandescent fixture that allowed you to just change the bulb to a higher wattage, stepping up a metal halide system to 400 watts requires changing the fixtures, too.

There are two costs associated with increasing the intensity of existing fixtures: investment cost and operating cost. The cost of changing the fixtures is significant, depending on the wiring infrastructure of the building. Increasing the wattage of the fixtures can drive the need for new circuits, higher capacity wiring, and new power distribution panels. The operating cost of the warehouse will go up as the new fixtures consume more power. A 60 percent increase in wattage means a 60 percent increase in power consumption.

Reflectors are another way to increase the intensity of light. In many pick modules the lights are simple florescent strip fixtures without reflectors. In strip fixtures the bulbs throw light in about 300 degrees of direction, up to the ceiling and down to the floor. The light really should focus on about 160 degrees of area below. One of the key design features of T5HO High Bay systems is the highly polished and focused reflectors that focus light in a specific pattern. Overlooked in pick modules because of the additional investment cost, simple white reflectors can increase of a single bulb strip fixture increases output by about 15 percent.

The closer the light source is to the work area, the more intense the light that reaches the work. Light levels drop of in a logarithmic pattern as the distance increases. Consider your office and your desk: Do you have a desk lamp? Is there an overhead light in the ceiling? Your desk lamp may use a 60-watt bulb, but the overhead fixture uses two to four times the watts. Which sheds more light on your desk? Play with your desk lamp, moving it closer to and farther away from the desktop, and observe the intensity of the light.

Getting a light source closer to the work in a warehouse is tricky. Assuming the fixtures are centered in the aisles, there is a limit to how low the lights can go and still provide enough clearance for the fork trucks to access the pallet racks. Still, there are ways to shorten the distance by making sure the light fixtures follow the centerline of the aisle. I can still walk into warehouse operations and see lights above the racks and not above the aisles. Moving the fixtures to the centerline of the aisle ensures that the light the existing fixtures makes focuses on the work.

Many pick modules afford some opportunity to get the light closer to the work.

The Form of Light

Light comes in different forms. Go to your local home center and look at the compact florescent lights (CFLs), and you will find multiple offerings in light temperature, the degrees kelvin the light bulbs create. The color temperature of light makes a difference, as we saw when we learned how sodium vapor lights reduce vision.

Color temperature is another form of measuring the wavelength of light. Expressed as nanometers (nm), (.000000001 of a meter), different wavelengths produce different colors of light. One of the pioneers in the study of light waves and sight was Dr. John Ott.

Cinderella and the Light

Ott worked with Walt Disney in the making of Cinderella by developing a way to grow pumpkins indoors so their growth could be photographed using time-lapse photography. Disney wanted the time-lapse footage so his artists could accurately render the growth of the pumpkin into a carriage. The initial attempts under incandescent light failed, and the plants never really grew. Ott worked with different kinds of lights, using florescent lights with some success. By changing the coating of the tubes and the frequency of the ballasts, Ott found that plants responded to different colors, or light wavelengths. Ott also discovered that he could see things clearer with some wavelengths, some of which mimicked sunlight. At the same time Ott discovered that different wavelengths changed the observed color of different objects — green objects turned black under red light and yellow objects turned green under blue light.

Ott discovered that light in 508 nanometer wavelengths produced the best visual clarity, and with less light intensity; a 50-watt light at 508 nm provided the same clarity as an incandescent light at 60 or 75 watts.

Ott’s work used florescent lights and ballasts that operated at a different frequency than the 60 cycles of traditional ballasts. The cost and size of the electronics needed at the time made them impractical until solid-state electronic ballasts arrived on the market at the end of the 20th century.

With the new technology, the question arises: do we really need 30FC of light in a warehouse? 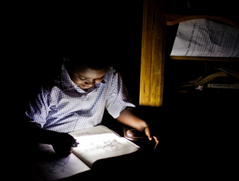