Tenant Improvement Allowance; What Gets Included and What Does Not?

A client looking at a new warehouse space called me about Tenant Improvements. His company’s current space was too small, and his boss had challenged him to find a replacement. This manager inherited the current location and has never looked for a new space before, let alone constructed a lease.

Wow. This could be trouble. We spoke a while about the needs of the facility—how much space, the number of doors, the height of the building, and dock door requirements. He had a good handle on the basics, except when it came to the office and other details, like power and sprinkler coverage. That is where the discussion on Tenant Improvement Allowance—AKA TI—started.

What are Tenant Improvements?

When a company leases a building, the building is often an existing space configured for the last tenant. There are cases in which a company gets to lease virgin property, but often the smaller the deal, the more likely it will be on occupied space, or a vacant configured space.

In commercial real estate, there are two major components to a building: the Shell, and the Build Out. The Shell is exactly what it sounds like—the outside walls, the floor, the roof, the exterior doors, and other systems that are part of the basic structure of the building. The Build Out is the building components added to configure the space to the needs of the tenant. Think of the offices, restrooms, and other facilities that convert raw space into usable space.

Tenant Improvements are nothing more than the preparation of leased premises prior to or during a tenant’s occupancy. These improvements can be paid by the for by the landlord, the tenant, or both. Tenant-paid tenant improvements (TPTI) are the cost outlay paid by the tenant.

When making a lease deal, the allowance includes any construction costs for changes or additions beyond the "shell" of the building. Who pays for the improvements can become a big negotiating point in the deal. We need to consider an example to illustrate. Let’s go make a deal!

Let’s assume we are leasing a space that has previously had a tenant, so there are some existing offices and other build outs. Our example deal is a 300,000-square-foot warehouse building with:

The Tenant Improvements will cover any construction beyond the specifications listed above. The allowance never is enough to cover real operations needs with a basic shell package. In this example, the property owner is offering a miserly 8.3¢ per square foot. For a new never-occupied space, the allowance would be higher, but I have seen deals in which the TI allowance got this small.

Is that a good deal or not? Well, that depends on what you are going to gain from the investment, and on what alternatives exist. A dock leveler is an installed piece of equipment that improves the value of the owner’s property. If we vacate the property in five years, the installed dock levelers have the potential to be attractive to a new tenant. If this were my deal, I would press the property owner to pay for the dock levelers, or a major portion of the costs, because the improvement increases the intrinsic value of the building.

Who should pay for the TI? Again, if it were my deal, I would press the landlord for as much as possible, with the understanding that the property owner may increase the cost of the rent. In the long term, the improvements increase the value of the property, which is a good thing for the property owner. I would work the deal to increase the rent to cover the costs, to a point. Let’s figure out that point.

If the property owner takes the cost of the improvement, they get the long-term depreciation of ten to twenty years, depending on the asset class. However, the smart property owner is going to front-load the construction costs onto us, since these improvements could prove to make his property harder to lease in the future should we move our operations. They may elect to amortize the cost of the construction over the five-year term of our lease without any residual, like this:

Under this deal the rent increases to $0.52 psf, if we throw in the dock levelers.

Would you take the deal? 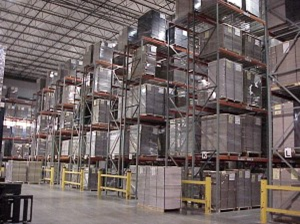