Logistics:  The Science
and the Art

"The shortest distance between two points is one unique straight line."
— Euclid

"Logistics is the fine art of getting stuff from Point A to Point B."
— David Schneider

Both of the statements above are undeniably true, and Dave's statement builds upon Euclid's. What separates the two, however, is a specific phrase: "the fine art." 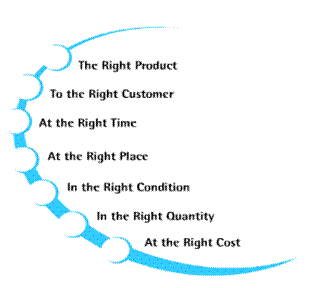 These are equalities, and if all the variables are correct, you've achieved supply chain excellence. But returning to Euclid:  when, if ever, does a supply chain afford us the luxury of a straight line?

Consider Boston. Navigation of this city is so difficult and counterintuitive that there's an old myth that the streets were originally laid out by cows going to and from the farm and market. The history of Boston Common, originally a cow pasture open to all, seems to lend credibility to this tale, but there are many other factors that likely had a more significant impact. An article at Celebrate Boston (a Boston travel and vacation guide) points to six other more likely causes of the labyrinth:
⦁    Forests
⦁    Topography
⦁    Natural obstacles
⦁    Commerce
⦁    Land speculation
⦁    Requirements for defense from attack (by Native Americans, pirates, or the French)

So even if we can't blame the cows, we can blame those who often behave like them:  people. A lot of chaos can result when man meets nature and attempts to subject it to his will.

The magnificent geometry of Euclid is the foundation of our understanding of spacial relations. But what symbol do you use to represent pirates when working out a proof? Furthermore, the map is not the territory, and what lies flat on your desk is a representation of something that's topographically disordered, and even a state as flat as Illinois is subject to the curvature of the oblate spheroid we call Earth.

We have a geometry that deals with such curved space. In the mid 19th century, German mathematician Bernhard Riemann introduced theorems that explain three dimensional spaces; there are no straight lines on a sphere, after all.

But even Reimannian geometry can't account for the organic development of cities, nor for the mountains, canyons, and bodies of water that separate them. Not to mention the choices people make when building freeways or railways. Hence Dave's use of the term, "fine art." Logistics and supply chain meld the highest principles of science with the finest principles of art. An artist incorporates both imagination and math into his work. The logistician does no less.

Logisitcs as a Matter of Life and Death