The Idea of the Distribution Center

In the early 1980s, I worked in an office furniture factory that sat next to Montgomery Ward’s distribution center in Kansas City, Missouri. To my eyes in 1983, that building was huge. A massive, eight-story, 1.5 million square foot, reinforced concrete warehouse building in operation since 1915. Closed when the company went bankrupt in 2001, the building went on to serve as a colossal flea market and light manufacturing operation. I remember the heavy activity of trucks in and out of the busy warehouse in the early 1980s, and how the bright red DISTRIBUTION CENTER sign etched a concept into my memory.

The Start of the Direct-to-Consumer Business Mail-Order Catalog

The concept of a distribution center is truly an American retail phenomenon. Aaron Montgomery Ward pioneered the idea of mail order catalog shopping. A traveling salesman, Ward understood that rural customers wanted the same goods as people in cities, but were frustrated by rural retailers who had little competition and thin selections. Ward thought he could eliminate the middlemen of the distribution process by offering goods directly to customers, delivered by the Railway Express Agency to the customer’s local train station. From a modest 163-item price list in 1872, Ward and his brother-in-law quickly filled a growing need for retail competition in America. The public reacted, fueling the company’s rapid growth over the next few decades. Ten years later, the “Wish Book” grew to over 10,000 items in 240 pages. By 1892, the catalog contained 568 pages and over 8,000 illustrations. Ward’s operations validated the concept of direct-to-consumer sales and attracted other mail-order catalog competition as Richard Sears issued his first general catalog in 1896, 24 years after Ward launched his business. Despite the competition from Sears, Ward’s business continued to expand, aided in part by the railroad-driven explosion of the rural American population.

Ward truly pioneered concepts that are mainstays in retail today. In 1875 he introduced the “satisfaction guaranteed or your money back” policy, and the good, better, best merchandise grades. The catalogs suggested to rural customers that they pool their orders together to help spread out the cost of shipping. The high cost of shipping spurred Ward’s greatest contribution to the world of logistics, the distributed fulfillment network.

As the business grew, Ward understood the need to expand his distribution operations, keeping one step ahead of the competition. The company moved from location to larger location until it opened the 1.25 million square-foot catalog house along the Chicago River in 1905. At the same time, the company expanded to the Southwest, opening a new catalog house in Kansas City, Missouri. The Kansas City market proved to be a competitive advantage for Ward, as the location placed the shipping point closer to the rapidly growing consumer market. The Kansas City operations outgrew the capacity of locations quickly, until in 1908, the company contracted with a local builder to construct a nine-story, 250,000 square-foot catalog house less than a mile from Union Station. Outgrowing that location too, Ward contracted to double the space in 1910. The company quickly outgrew that space, and in 1915 moved to a new 1.2 million square-foot facility in the industrial northeast section of Kansas City, next to the building where I worked in 1983.

Ward continued to expand, as did Sears, through the first three decades of the twentieth century. Starting with the new Kansas City catalog house, Ward built a network of massive reinforced concrete distribution centers, as the company started to call the new facilities. Ward established distribution centers in Baltimore, St. Paul, Portland (Oregon), Fort Worth, and Oakland, shortening the distance from fulfillment to the customer, lowering the cost and shortening the time it took for the customer to receive their goods. Sears chased Ward across the country, building warehouse operations in principal cities to support catalog sales and the growing network of retail storefronts. 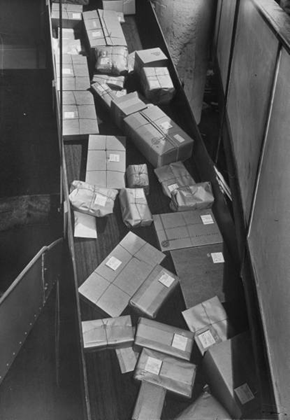 In the construction of both the Chicago catalog house and the Kansas City distribution centers, Ward vertically integrated the building infrastructure, incorporating the latest building construction technology. Starting with expansion of the operations along the Chicago River, Ward used reinforced concrete construction for the floors, support columns and walls of the buildings. In fact, the first Kansas City catalog house built near Union Station used reinforced concrete in the internal columns and floors, but a brick exterior. Seven years later, a building three times the size replaced it. Ward built somewhat self-sufficient operations in Kansas City, installing two massive steam-driven DC generators in the bowels of the building to provide the power that lit the building, drove the freight elevators, and powered the package conveyor systems used in distribution operations.

Montgomery Ward pioneered the use of package conveyors to move products through the massive Chicago operations. The employee newsletters of 1905 mention the conveyor system often. Throughout the facility the “conveyor boys” watched the cartons and “totes” move by, manually sorting by reading the order ticket in the tote and pushing the totes from one line to another.

If you examine every function in modern Order Management Systems (OMS) and WMS today, you will find mention of a corresponding manual function in the history of the Ward catalog houses in Chicago and Kansas City.

In the fulfillment center of today, computers have replaced the army of people who performed these tasks a century ago. Under close examination, however, each of these steps exists in any e-commerce operation today. In fact, some e-commerce operations still receive orders via the postal service. Over the years, telephone and the Internet have added new ways for customers to place an order, but they have not completely replaced the original paper methods. The difference between the Montgomery Ward operations of a century ago and the e-commerce fulfillment center of today is the speed of the process, and the number of people needed to move the process.

One of my early mentors reminded me that there are no original ideas, only new applications of old ideas. That mentor reminded me to research history to see if a solution already existed to any problem I was attempting to solve. That advice has served me well over the course of my career.