"Who Is H. Lawrence Higginbotham?"

"Please take a seat. Mr. Higginbotham will be with you shortly."

"Okay, great," I replied to the administrative assistant, who was — remarkably — male. After two dozen or so of these interviews with the world's most powerful leaders and CEOs, I'd grown accustomed to greetings from women. Even the women I interviewed usually had female assistants. But the only male admin I'd encountered worked for a Saudi oil minister, and I put that down to cultural differences. 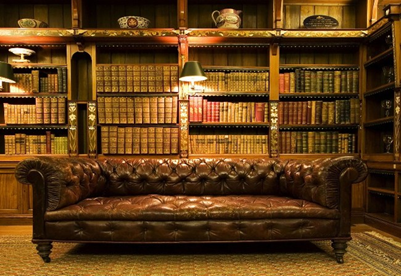 "The list grows," I muttered to myself as I sat down on a tufted leather sofa. Frank at the office and I were compiling a list of odd facts and tidbits about Higginbotham we might use to pepper the executive profile we were building.

As I looked around the ante-room outside Higginbotham's office, I noted the elegance of the furnishings; the room was decorated in a vintage fashion that exuded class. Almost too much class, actually, as if someone were trying to make a point. Rather than the bright, minimalist approach that seemed de rigueur for corporate lobbies these days, the warm, traditional feeling of this room evoked images the Houses of Parliament. Old money, perhaps? I asked myself. British aristocrat? Beyond his English last name, little was known about the man and his background. None of the rumors had ever mentioned an accent, however.

The ante-room had a typical "techie" feel to it, and its sole feature was the back-lit metal sign on the wall emblazoned with the company logo, OmniCo. As comfortable as I'd grown in these settings, a twinge of uneasiness struck me as I remembered that I was about to meet the elusive owner of a multinational corporation that, with its recent acquisition of UniCo, had become the world's largest private employer, second only to Walmart.

OmniCo acquires UniCo, I thought. That can't be a coincidence, can it?

The assistant stepped out from behind his desk and courteously motioned for me to follow him. He knocked twice on the double doors, and without waiting for a response, opened one and ushered me in. Rather than simply close the door behind me, he stepped in as well. As soon as we entered, a short, immaculately dressed man in his fifties sprung from behind a mahogany desk. He struck a massive smile and shook my hand vigorously, looking me dead in the eye.

The assistant started to introduce us, but was immediately cut off. "Mr. Higginbotham, this is …" "Yes, James, I know!" The grin never left Higginbotham's face. "This is Joseph Hill, the writer from Forbes. I'm very pleased to meet you, Mr. Hill."

"It's an honor, Mr. Higgin…" and then I, too, was immediately cut off. "Please call me Larry. I've tried to get James to be less formal but he simply refuses. I'd fire him but I can't afford to replace him." Higginbotham winked at James.

"Larry, then, " I continued. "I'm honored. And please call me Joseph."

James asked, "Would you gentlemen like anything to drink? Tea? Coffee?"

"Whiskey!" cried Higginbotham jovially. James instantly turned toward the serving trolley on the right side of the office, but Higginbotham didn't make way for him. "No, no, I'll take care of it, James, thank you. You know I enjoy the ritual of the pour. Please hold all my calls." James nodded, stepped out, and closed the door behind him. "You do drink whiskey, don't you, Joseph?" He gave me a look of feigned suspicion. I shot him back a wry smile. "I'm betting this interview would end immediately if I didn't!"

Higginbotham laughed heartily. "And I'd have security escort you from the building! On the rocks or neat? Please, sit."

"Rocks, please." Easing my way into one of two armchairs before his aircraft carrier-sized desk, I noted the conspicuous lack of a holographic projection base for a computer monitor. Maybe it's built in to the desk? I wondered. But I couldn't make out where it would be installed, and despite the immensity of the desk, the only items I saw upon it were a leather memo pad, a Visconti fountain pen, an intercom telephone, a miniature flag stand, and a nameplate — H. Lawrence Higginbotham, it read. Two flags flew proudly in the little stand: the Stars & Stripes, and another I didn't recognize. It was halved lengthwise, red on top, white on bottom, with a circular green emblem in the center featuring an eagle atop a fleur de lis. Above the bird were the letters "B S A."

On the walls were pictures of Higginbotham's family, and tacked to one side was a sheet of lined paper featuring a crayon drawing of a man behind a desk. Higginbotham followed my gaze. "Quite the little artist, my son is. His name is Alex. He's six, and he seems to think I wear sunglasses while I work. I'm also not sure why I don't have any hair."

"Or legs for that matter." I chuckled with him. "I think he captured you quite well."

"So, Joseph," Higginbotham began as he handed me a crystal tumbler and made his way around the desk, "I understand you have a few questions about my business. Now that the drinks are poured, I'm ready when you are."

"More than a few questions, Larry. Everyone at Forbes and all our readers are absolutely intrigued by what you've done here. You're now number 47 on our list of the World's 80 Most Powerful People. As amazing as that is, what truly defies belief is that, as of this time last year, we'd never even heard of you, let alone rated you on any list." Higginbotham nodded as I spoke, but a response didn't appear to be forthcoming. 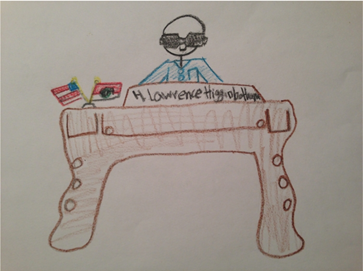 "So," I continued, "I suppose the first subject I'd like to talk about is … you. Who is H. Lawrence Higginbotham?"

"You want to talk about me? Well, that's my favorite subject!" He laughed deeply again, and his cheery demeanor belied his admission of egotism.

"And I think it's about to become mine, too," I concurred with a laugh, hoping to cultivate a rapport. I genuinely liked him, and I took him for a man not entirely immune to charm, within limits. "May I record our conversation?"

I looked down at my wristwatch and swiped a finger across the crystal. The display switched from digital clock hands to a question written in white letters above a waveform:  What can I help you with? The watch dinged twice, prompting a voice command.

"Siri, start recording a voice memo," I said. The screen switched again and the watch began recording. "Today is July 23, 2024. This is Joseph Hill reporting for Forbes, and I'm excited to be sitting down with CEO and Founder of OmniCo, H. Lawrence Higginbotham, for part one of our very first interview." I looked back up at Higginbotham. "So, Larry, you're kind of an enigma. We want to understand who you are. Not just as an executive and a leader, but as a man. Where should someone who wants to get to know you start?"

After a brief pause, Higginbotham began. "Well, Joe, to understand who I am, I have to start with a story from my childhood. It was really one of the defining moments of …"

A beep sounded from the intercom on the desk, and the voice of James came through. "Excuse me, Mr. Higginbotham, but you have a call from …"

"I thought I said to hold my calls, James!"

"Ah! Put her through of course!" He looked at me as I swiped at my watch and paused the recording. "This will just be a moment … I think."

"Hey there, Sugar Daddy!" Higgenbotham's wife had a sweet (if slightly high-pitched) Brooklyn accent. She was as playful as he was cheery. "Hey there, Shelley darling," he said. "I've got you on speakerphone, so you behave yourself, you hear?" He spoke with feigned sternness.

"Oh I see, Mr. Big Shot CEO is in a big important meeting, is he?" Had the viewscreen been activated I was sure I would have seen her rolling her eyes. "And when exactly do you expect to complete your world domination? Any chance it'll be before dinner?"

"Is it really?" Higginbotham looked at me and gestured to my watch. I nodded. "Oh, well, I didn't …"

"It's date night, my dear," Shelley was obviously the only person in Higginbotham's life who interrupted him. She took on a semi-serious tone. "You owe me dinner and a movie, and if you're not here in 30 minutes, I promise you, Herbie, there will be hell to pay."

What did she just call him? I thought, puzzled. A look of two parts mortification and one part indignation came over Higginbotham. He took a deep breath and forced a smile. "Shelley, darling, I seem to remember quite explicitly requesting that you not call me that in public."

"Oh get over it. It's not public; it's your office. See you in 29 minutes! Love you, bye!" And with a click, she was gone. After a slightly pregnant pause, we looked at each other and I offered, "I should probably be off then. Maybe we can pick this up on Monday?"

Higginbotham was slightly flummoxed, "My apologies, Joe. I obviously forgot to tell James not to schedule anything for this evening. Shelley is traveling next week and we needed to move up our date night. Listen, Monday's no good. Tomorrow, Saturday, come over to my house. We'll have lunch. I'll have James forward you the address."

"I'd love to, Mister … umm … Larry, and no apologies necessary!" I was still stuck on why he got so upset about the name his wife had called him. "Excellent," he said, opening the door for me, "See you tomorrow."

We shook hands again, and just as I stepped out of the office, he stopped me and gave me a pleading look. "And Joe, I saw the look on your face, and I know you're wondering. The 'H' in my name stands for Herbie. Just don't tell anyone, Okay?"

The Joy of Small Lots and Orders