It is interesting living close to an airport. You get to see quite a few aircraft. I like looking at airplanes—the sleek exteriors, the shapes—and I’m amazed at how we have the technology to put a machine in the air.

We live close to Dulles Airport in Northern Virginia. On cold mornings, the winds blow the smell of jet fuel and exhaust through the air. To paraphrase a line from Apocalypse Now, "it smells like travel." We live close enough that I take a cab to the airport whenever I fly. The cab fare is less than the parking. 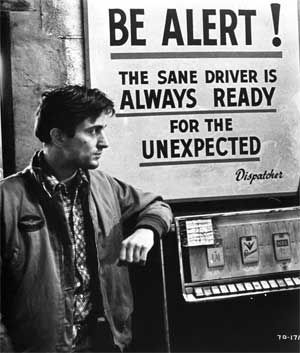 The cab drivers are always from "somewhere else." India, Pakistan, Iraq, South Africa—it is a large collection of players. In all cases they speak English very well and drive like the average DC metro-area driver, and in many cases they are fairly well- educated. One driver this summer spoke forcefully about economics, like a professor would.

On my last trip, I left at “O-dark-thirty,” and as usual, took a cab. And as usual, someone with an accent to their voice got out of the car and met me at the trunk lid to put my bag inside.

This particular morning proved not to be so usual, and I was greeted with a jovial, “What? No coffee?”

The ride proved interesting. I responded with, "No time today, but I will remember next time," as I climbed into the back seat.

Before we pulled away, the driver asked me if I had everything. I told him I did.

I thanked him for asking the questions, and said it showed care for the customer.

“It is good for the customer, and for me, and my next customer,” said the driver. Then he started to tell me a story.

“I picked up this woman. It was an early morning pickup. I arrived early and she was ready. I asked her the questions I asked you, and she answered that she had everything.”

Sounds good so far, but I could tell there was more to the story.

“A few miles later, with $7.50 showing on the meter, she asked me to turn around, saying that she just realized she did forget something. I did as she asked, turned around and drove he back to her place. Along the way I asked her, ‘What is so important that we had to go back?’

“Mr. David, you know what she said? She forgot her chips. Chips? I asked if they were medicated chips, special rare chips that she could not get at the airport.”

At this point I started to laugh.

The driver, whose name was Moe, warned me that the story only got better. When they got back to her location she retrieved the bag of chips. Not a large bag. No. This bag of chips was one of those ¾ ounce bags that you pack in a little kid’s lunch.

“What is so special with that bag of chips?” Moe asked his customer.

“Well, I opened the bag while waiting for you, and you came early. I forgot the bag, and if I did not go back they would go stale, and I would have to throw them away,” his passenger confessed, a little embarrassed.

Along the ride, Moe entertained me with stories of his time in the management trenches. Stories of Pizza Hut and Cracker Barrel. I would put Moe in his late 50s. He started driving a cab because he needed the work, and it was what was available. I can tell that Moe was a capable manager. The stories he told, and his demeanor, spoke volumes about his front-line management experience.

At some point, one of those companies turned him loose. Demographics and pay scale got to him. Gen-X managers are coming up the ranks, and they want the district manager spots. A 30-year-old manager can be brought up to replace a 50-year-old manager making twice the pay. The company profit improves on the pro-forma, but the improvement is short-lived, almost imperceptible on the actual income statement. Moe was let go to make room for a Gen-X player who made a bit less money, making the company more profitable.

Moe is a casuality of the changing marketplace. That he decided to become a cab driver, someone who measures their business success one day at a time, fare by fare - now that is a risk-taking move. Cab drivers work long days, sometimes spending over 12 hours on duty. Incidentally, the cost of a coveted New York City Cab Medallion can go for median of six figures (there is a finite number of medallions, so owners can make big money renting out the use of their medallion).

Moe is a super driver. I told him about the Practitioners, and that he should check us out.

Moe, if You Do Read This, Give Us a Call

How does a competent manager end up driving a cab? This is one story. How about the story of a competent business executive driving an over-the-road truck? That is another story.

Some time ago, when I managed a warehouse, we received a load of product late. We got a call from the driver, the dispatcher, and the shipper, that the driver was late. Our usual policy was to reschedule late loads for the next day, but when the shipper called to tell me that the driver had missed the appointment because they had detained him, I decided to go ahead and unload the late truck.

The rest of the staff had gone home, I was getting ready to lock up when I got the calls. I told them to get the truck in within an hour and I would unload. The truck was already by the gate.

While I hustled the freight off the truck, the driver thanked me for the unload by offering up a $20 bill. I turned it down, but asked the driver to help check in the freight, which he did. While we were doing the roll counts, I asked him what he did before driving a truck.

He said he was a retired executive from Eastman Chemical. I remember standing still, looking at a 45-year-old guy, and saying, "Why drive a truck?"

Taxi Drivers Are Not Subject to Hours of Service (HOS) Rules.

Taxi drivers don’t have to have a log book. Taxi drivers don't have to sleep in the car; they can drive home, even after working for more than 12 hours. Cab drivers may actually make more in tips per hour than a truck driver does in the same time. Driving a truck today is much more involved than driving a cab.

And I make no bones about being a cab driver; that takes some skill, too.

But the two are not the same. I bet that if that retired executive had to make a choice—truck or taxi driver—I think he would choose the cab.

The Many Roles of Steel in Highway Construction